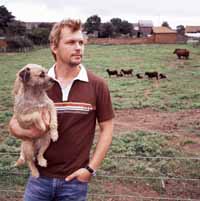 A Farmer’s Life For Me sees nine couples – ranging from factory workers to city execs – competing in various tasks in a bid to “turn their farming dream into a reality” by winning a small farm.

On FWi forums, Bovril said: “Without that extremely annoying voice-over, there might have been a decent TV programme underneath. Nothing really related to what I would call farming, but something for urban viewers.”

Peter Wells said: “The comments from a lot of the couples were interesting and they clearly all grasped the importance of food production in society, and they are clearly learning very quickly how much hard work it is.

“The format of such small plots didn’t work for me – their business ideas would work equally well on paper, but that wouldn’t make such good viewing!”

MattyS thought it was “good for urban viewers – but not of any interest for rural viewers. Good to see Paul Kelly (an actual farmer) on there though!”

FWi editor Julian Gairdner commented: “Too often farming on TV is all bad news. It’s nice to have something lighter which, although a bit removed from the true reality of farming, gave the impression that farming was a life worth living… and, along with Countryfile, airing on primetime TV – it’s all good profile. We shouldn’t complain about that.”

Lizzyno saw it differently. “I thought it was awful – just a Big Brother-type thing where who-falls-out-with-whom is the object. In any case, what’s the point of winning the right to ‘farm’ 25 acres for a year?”

Texel Tup said: “The BBC, having played a blinder in recent times with their coverage of farming on Lambing Live and Adam’s farm on Countryfile, have in 60 minutes of primetime TV ‘managed to screw the pooch’ with this effort.”

Did you watch it? If so, what did you think? And let us know your views on how farming is portrayed on TV generally. Share them on the forums.