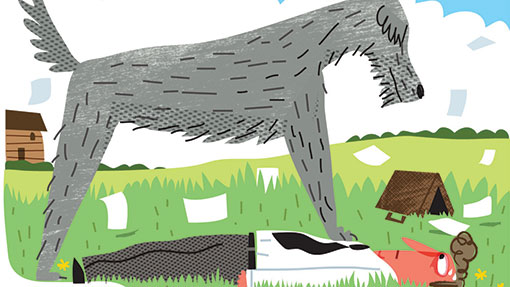 It is a privilege to work for the best-selling agricultural publication in the country, but it is not without surprises. We asked the editorial and sales teams to share some of their most memorable moments.

At the annual tractor multi­test in Germany many years ago, I was taking a big John Deere and sizeable six-furrow plough from the field where we were working to a farm some way away. I was the last in the convoy of tractors and my six colleagues all got across the road junction before the lights changed. I didn’t make it, though.

So there I was, on my own, totally lost and with no mobile phone – and it was almost dark. To make matters worse, I found myself in a sizeable town where there must have been a festival going on.

Meanwhile, the end of my plough was swinging alarmingly from side to side like the Tyrannosaurus rex’s tail in Jurassic Park, and small children were skipping about unaware there was a mad, lost Englishman out of control.

Eventually I found the right road and made it back. However, I’m sure there must have been a piece in the following week’s local paper along the lines of “Mystery Brit ploughman runs amok”.

The day I was asked to be a toilet attendant by a Cabinet minister is one that sticks out for me. I was reporting from the CLA’s centenary conference in London in 2007, where the then Defra secretary David Miliband was the VIP guest speaker.

Imagine my surprise when halfway through the day the minister approached to ask if I could check if anyone was in the ladies’ toilet. Somewhat bemused, I did and it was empty, so Mr Miliband proceeded inside. No explanation, just a polite thank you for making sure the coast was clear.

The theory goes that he’d been accosted by some angry Welsh farmer in the gents’ toilets at a conference a week or two before and he wanted to avoid a repeat performance.

Female readers will be pleased to hear he did not leave the seat up.

Lost in the car park

It was 1984 and I was wet behind the ears and attending my first major show in Lincolnshire. I had to meet a client but I’d got stuck in traffic, so as soon as I arrived on site I dumped the car and dashed to my meeting. When I came out I couldn’t find my car among the thousands in the car park.

My bright idea was I’d have tea and wait until everyone left and then I could find my car.

Unfortunately, I discovered there was a big event that finished at 9pm, so I didn’t actually find my car until gone 10pm. I haven’t forgotten where I’ve parked since.

One of my first overseas trips with Farmers Weekly was to the Swedish countryside. It was a fascinating, illuminating couple of days, and on one night we stayed in a farm lodge out in the wilderness in the north of the country.

Our host offered myself and the Farmers Weekly photographer the opportunity of a sauna. So far, so good.

Except, the sauna was “home-made” (think outside hut). And he was insistent that we had the “authentic” experience. Which meant no towels (not even to protect our modesty) and jumping into a tub of ice-cold water immediately afterwards.

Myself and the photographer saw rather more of each other on that trip than is perhaps ideal for two work colleagues.

On my first trip to a Danish pig farm I soon found out there’s nothing to be shy about if you’re a livestock reporter, where communal showering in and out of farm premises is the norm. Biosecurity is a serious business these days.

So why is it, I thought to myself as I emerged bedraggled in my standard-issue boots and overalls, that farmers always manage to make me look like a clown?

I was like Charlie Chaplin in oversized boots and my overalls set a new low in crotch level. One size certainly did not fit all.

One of my first sales calls back in 1998 saw me visit a machinery manufacturer in Somerset.

I turned up suited and booted at the farm, but no one answered the front door. So I walked around the back of the farmhouse into a large back garden and saw my client was sitting in an office at the bottom of the garden.

Just as I started to walk down the garden, an Irish Wolfhound dog came tearing round the corner and leapt at me, hitting me square on the shoulders with both front paws. I was knocked clean off my feet on to a very muddy lawn. The dog just stood over me, staring down. I was covered in mud. Not the impression I was hoping to convey.

I was invited to attend a dinner by a prestigious pig breeding company. In attendance were some of the top pig farmers in the country. We had to pre-order our food before the event and with beef being my preferred choice of meat I checked that on the menu and thought very little of it.

I realised my mistake on the night, when the waitress proceeded to bring out plate after plate of pork. I was the only person who had ordered an alternative. My dish arrived last to bemused looks from around the table and for the rest of the evening I was questioned by fellow guests as to why I hadn’t ordered pork.

I was invited out to Brazil by the country’s poultry farming trade organisation, to attend its biggest conference showcasing the might of Brazilian chicken.

No expense was spared in wining and dining journalists from around the world, and I looked forward to a packed schedule of analysis and insight.

The first morning was seriously impressive. A motorcade swung into the reception and began installing metal detectors as translation headsets were handed out to delegates entering the main hall. The conference was to be opened by none other than the vice-president of Brazil. He spoke passionately of the chicken industry’s importance to the country, giving me some great copy along the way.

So there we were, trundling down a tree-lined road in one of the remoter parts of the German countryside, when out of the blue we spotted a lone motorhome nestled in a wood. “Funny spot for a bit of camping,” we said. “Perhaps they like walking?”

But then there was another and another, and another. “Gosh, this must be some sort of tourist hotspot – Claas must be really pushing the boat out for its latest tractor launch.”

It wasn’t until van number 50 that one of the more alert members of the group spotted a little red light flashing in the window. He took a closer look. “Blimey that woman’s almost naked.”

Turns out the innocent families we thought were enjoying a woodland walking break were in fact prostitutes plying their trade.

You’ve got to hand it to them though – only the Germans could make curb crawling an organised and efficient pastime – why waste money on a pricey hotel room when you can camp on site?

But it raises a very important question: If you’re in the market for a second-hand motorhome, would you buy it from a German?