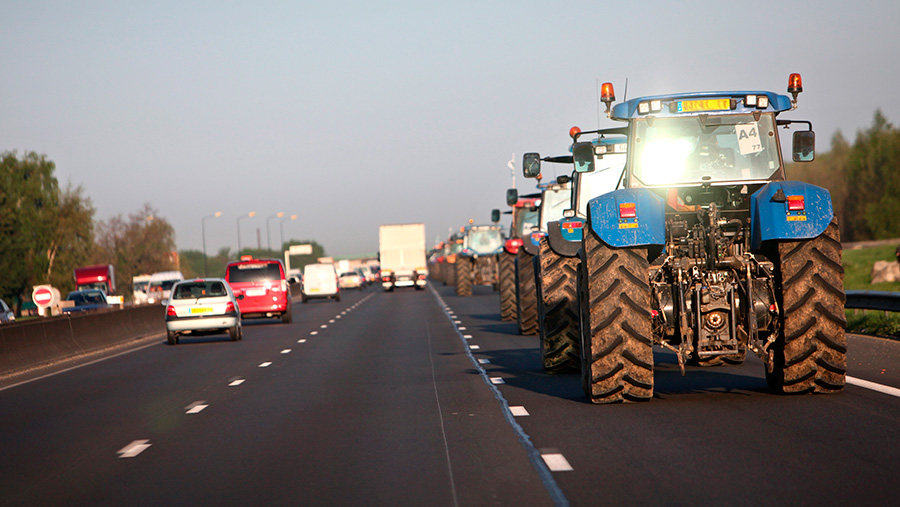 News of a tractor driver getting fined and having points added to his licence after allowing a 50-car tailback on a road in Somerset sparked a swift response from Farmers Weekly readers.

Below are some of the comments Farmers Weekly readers left on our Facebook wall.

“What about when you get that one person behind you who will not overtake you, even if there is a clear stretch of road ahead?

“People then pile up because they don’t want to overtake a car and a tractor. Put in more pull-in places where we can pull over – ones that aren’t littered with pot holes, too.”

“When a tractor driver does pull in to let a tailback of traffic pass on a busy road, other drivers won’t give way to let the tractor back into the flow of traffic as nobody wants to be stuck behind the tractor.

“Therefore, it’s a catch-22. Don’t forget farmers and agricultural contractors have deadlines to meet, too.”

Do you have a view on this topic? If so, email them to fwfarmlife@rbi.co.uk

“I got stuck behind three cyclists this morning for more than a mile and a half, they went past lots of places where they could have pulled over or given me more space to pass. Rather be stuck behind a tractor any day.”

“The number of vehicles is irrelevant, it’s the time they’ve been behind the tractor that should be the offence.

“I farm half a mile from the A158 Skegness road – at weekends in summer and holiday time cars are nose to tail so it would be impossible to have a vehicle number limit because you’d be pulling over every 30 seconds and, when you have a tractor and trailer outfit that is maybe 50ft or longer, you cannot stop in many places.”

The driver should have got a warning, that is it, nothing more. Did the 50 cars behind him benefit from the fine and points on his license, no they didn’t, another case of the police being over zealous.

“There is no minimum speed limit on A and B roads, how many of us have been stuck behind retired folk doing 25mph for no reason? Do they get fined?”

“It is about basic respect. While farmers do an important job, so do other road users who should also be able to use the roads with an expectation to get to their jobs on time.

“A Kiwi cousin farmer got stuck in a massive tailback because of a tractor near Whitby and he was appalled the young lad didn’t pull over.”

“The lack of places to pull over is what I would blame. The amount of laybys that have been closed over the past 10-15 years is ridiculous and then, if we pull over onto grass verges and we sink, they moan because the road needs closing for recovery.

“Car drivers have a chance to pass and don’t bother so you can’t just blame a tractor driver… people would soon be moaning if they didn’t have food on their plates at night because we have to pull over to let every single vehicle past wasting hours every day.”

“Absolutely ridiculous. I am going to start reporting everyone who drives below 45mph, on a road who have a whole load of vehicles behind them, now – because that’s what the law has set the precedent on.”

“It is a hard one to call without witnessing it. I have been driving tractors for 40 or so years and have never had 50 cars following me so I can’t imagine he was faultless.

“However, I really don’t know why a fine and points were called for? Surely a good old-fashioned telling off would have been sufficient?”

“Fifty-car tail back? He could have potentially held up emergency services responding to any kind of emergency, and also would have caused drivers to make dangerous manoeuvres, thus causing an accident.

“I’m all for farming and machinery on roads, it has to be there but some of the operators need to learn manners.”

“This is a disgrace. What are farmers meant to do, tractors carrying heavy loads cannot go faster, and if the roads don’t have laybys, then that is not farmer’s fault.”

“There could be paramedics, nurses and doctors that need to get to work in that queue.”

“What about the caravans that clog up the roads and NEVER pull over or overtake? The lad was doing a job.”

“I pull over whenever possible, but a lot of the places I use to use are now kerbed or fenced off. If fully loaded, there are fewer and fewer places to safely pull over.”

Do you have a view on this topic? If so, email them to fwfarmlife@rbi.co.uk