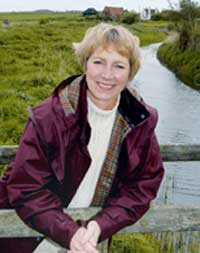 To the general public, farming and life in Britain’s glorious countryside is a rural idyll. Perhaps that is why the Arthur Rank Centre (ARC) is the first charity serving country communities to be selected for the BBC Appeal charity slot since the broadcasts started in 1927.

Explaining why life in the country can be tough and how the ARC can help tackle rural hardship and suffering will be a woman with empathy for rural communities – Pam Rhodes. Pam has worked on a range of TV and radio productions including many news programmes and Country Days, a weekly series based on rural life in East Anglia. For more than 20 years, she has also been the familiar face of BBC’s Songs of Praise.

“Through these programmes I get to meet many people and talk to them about the various aspects of their life,” says Pam.

“I have become aware of the loneliness and isolation of modern farmers, the challenges of the supermarkets, disease and weather they face and also their spirit of stewardship, the responsibility of looking after the land.

“To outsiders, it doesn’t look as if there is anything but pleasure in farming and country life, but there are not many resources to call on when things go wrong. I have seen the suffering at first hand, people like Robert, who lost his farm business and home through ill health and was left with nothing and no one to turn to.

“For more than 38 years, the Centre has made a difference to rural communities, putting people like Robert back on their feet and giving them hope again,” explains Pam. “What’s more, the church is at the heart of everything they do.”

ARC defines itself as a collaborative unit supported by national churches, the Royal Agricultural Society and the Rank Foundation, serving the rural community and its churches. It is a charity encompassing a web of support agencies, among them the Farm Crisis Network, ARC Training (work-based training for disadvantaged youngsters) and the Rural Stress Helpline.

The Helpline provides more than a sympathetic ear – for some, such as Margaret, it is an answer to loneliness. She was left isolated and depressed when her marriage broke down after 34 years. She doesn’t drive and, without even a village shop and practically no local activities, she found it difficult to meet people and was very lonely. ARC put her in touch with her local church and one of the congregation visits her regularly and takes her to coffee mornings, where she is making friends.

For others it is a lifeline. A farmer living alone, struggling to look after himself and his animals, contacted the Helpline because he had no one to turn to. He talked about suicide. He was referred to the Farm Crisis Network, which helped him with local support, and he learnt he could ring the Helpline whenever he needed to talk to someone who could understand what he was facing.

A regular visitor to ARC’s base at Stoneleigh in Warwickshire is the Reverend Barbara Clutton, an agricultural and rural life officer for the Coventry Diocese. ARC provides her with extra support as part of its work with the rural community and its churches. She is Chaplain to Rugby Farmers Mart, where she is a well-known, well-loved and trusted face. She was a livestock farmer until recently. Ordained five years ago, Reverend Clutton now covers five parishes.

“I am accepted by the farmers at the Monday market because they have known me a long time as a farmer – I still attend sometimes to sell my own stock. But I am also there every week as Chaplain to talk through problems. Sometimes people come to me to discuss plans for funerals or weddings. Others just need someone to listen,” says Reverend Clutton.

The farming community is very close and generally looks after its own – but sometimes extra help is needed. “Which is where ARC comes in,” she says.

In her experience, isolation and loneliness go unnoticed in rural areas because cases are scattered, there are few local services and poor public transport – people don’t get out to see other locals. It is exacerbated by the closure of rural post offices (she is supporter of ARC’s work to put a Post Office in churches for a few hours each week) and poverty – again masked by a generally high standard of living.

For all the beauty and benefits of country life, it is a sad fact that more than 900,000 rural households in Britain live in poverty and ARC can help bring this reality to the public’s attention. It is expected that 1.9 million listeners will tune in to the BBC Appeal. Hopefully, Pam Rhodes will dust it with the success so much of her broadcasting career has enjoyed, bringing a boost to ARC’s funds that will prove well worth the long wait to fill the BBC Appeal slot.