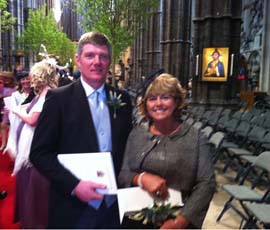 Hereford farmers Phil and Heather Gorringe have described the experience of attending the royal wedding as “surreal” and “special”.

The pair, who farm part of Prince Charles’ Duchy estate in west Hereford, received a surprise invite to the event in April. On Friday they took their seats in Westminster Abbey, where they saw the wedding party travel up and down the aisle and watched the service from TV screens that had been erected inside the Abbey.

“One of the most moving moments was when the congregation sang the national anthem,” said Mrs Gorringe. “We had no idea it would be so loud. You could sing at the top of your voice with no trouble – the choir and the organ were just soaring above you.”

Mr and Mrs Gorringe were seated to the left of the north knave by the orchestra. After the ceremony the couple walked to the Duchy office next door to Buckingham Palace, where they attended a rooftop drinks reception with other Duchy estate tenants, including farming couples from Bath and Cornwall.

“It was a really special day,” Mrs Gorringe told Farmers Weekly. “The whole day was something we will never, ever forget. It was all so surreal, you just had to keep pinching yourself.”