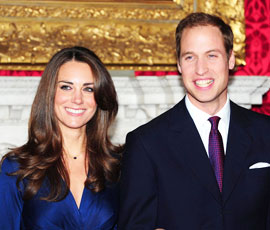 A Herefordshire farming couple will be among the 1,900 guests attending the wedding of Prince William and Kate Middleton today (Friday 29 April).

Tenant farmers Philip and Heather Gorringe succeeded where Gordon Brown and Tony Blair failed when they received an invite to the royal wedding. The pair travelled to Westminster from Lower Blakemere Farm in west Hereford – part of an estate owned by the Duchy of Cornwall.

“The industry is something very close to Prince Charles’ heart so our invite must be connected to that, because we are his tenants,” said Mrs Gorringe, who also runs a natural garden supplies business called Wiggly Wigglers. “The royals never seem to forget where their food comes from and how important farming is.”

It’s not the couple’s first brush with royalty – they have already met Prince Charles, Prince William, Prince Harry and the Queen. Nevertheless, the invitation came as a complete surprise.

“When I opened the post, it was a real bolt out of the blue. I had to have a sit down and just take a real look at it again and again. When I phoned Phil, I was just whooping and hollering because it was such brilliant news.”

But while the Gorringes are watching the service live from inside Westminster Abbey, not every member of the farming fraternity will be turning on the TV to witness the royal nuptials.

“I may use the excuse for a BBQ and beers in the garden but it’s really not my bag (or hat for that matter),” said FWispace forum user topdog. “In reality, I will probably just carry on as normal and start marking lambs.”

Another said: “I will be laying concrete for a feed bin foundation, weather permitting. It is a working day here and the nearest street party is several hundred miles away.”

• Did you tune into the wedding coverage, or was it business as usual? Join the conversation on our forums at www.fwi.co.uk/royalwedding