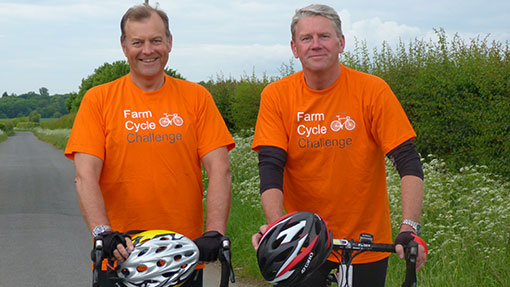 Farmers and their friends are pedalling thousands of miles and undertaking incredible adventures to raise funds for charity. Mary-Vere Parr catches up with four intrepid cycling team

Peter Kendall is best known as the former president of the NFU, current chairman of the Agriculture and Horticulture Development Board (AHDB) and president of the World Farmers’ Organisation (WFO).

But recently he’s swapped the corridors of power for the lanes round the family arable farm in Ashwell, Hertfordshire, and his business suit for T-shirt and Lycra shorts, to train for the Farm Cycle Challenge with his friend and neighbour, grain and biofuels consultant Richard Whitlock.

“I thoroughly enjoyed the training,” says Peter. “For a fat, middle-aged bloke, it’s quite a challenge, but it was lovely to get out in the countryside, see the crops and discover roads I never knew existed before.

“So far it’s just madness and ambition,” he adds. “I have only owned a bike for a few weeks.

The monies raised will benefit UK farmers affected by the winter floods, as well as Farm Africa, a charity working to end hunger and poverty in eastern Africa.

The plan is for Peter and Richard to visit all of the NFU’s regional offices in England and Wales over 11 days. The longest stretch is the 190km (118 mile) York to Uppingham leg, but it is a pretty relentless schedule, averaging 148km (92 miles) a day with just a single day’s rest.

Staying in farm B&Bs, with friendly farmers en route and at the Farmers Club in Whitehall for the London leg, Peter and Richard hope to whip up support along the way. The pair suggest a £100 donation to join the ride for a day.

Peter’s wife Emma will lend her support in the second week. Their children George, Tom and Sophie will be at school, but are fully behind the challenge too.

“The NFU was pretty full-on and entailed too many dinners and glasses of wine,” Peter says. “My kids have been relentless in their condemnation of my decline so they are over the moon that Dad is turning back the clock and getting fit.” 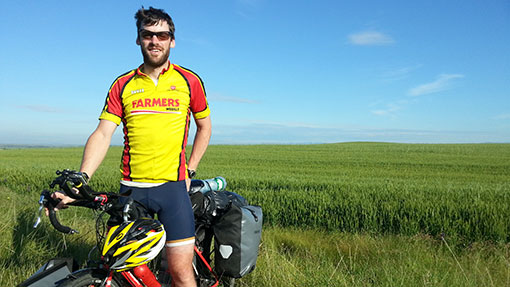 On 20 April 2014, Will Frazer (pictured above), a farmer’s son from Northern Ireland, took a career break from his job with Farmers Weekly and set off on a seven-month bike ride round the world.

Riding with South African/British engineer and explorer Johan du Plessis, the pair aim to help bring an end to the illegal trade in rhino horn and to raise funds for protecting wild rhino across Africa and Asia from poaching and habitat loss.

“But this isn’t just about rhinos for me,” Will says. “It’s about conserving mega fauna and the natural world in general.

“The rhino is symbolic of a whole complicated system of conflict between humans and wildlife that has gone badly wrong,” he adds. “If my efforts and skills can assist those already knowledgeable in how to fix these problems, then that is something I’d like to do.”

Having left Trafalgar Square on 20 April and caught the ferry from Dover to Calais, Will and Johan rode east across Europe, heading south through Turkey and across central Asia to Shanghai. From there the plan is to travel to South Korea and through Japan to Tokyo, where they fly to San Francisco, climb over the Rockies and cycle across the mid-west to finish in Miami in mid-December.

Altogether they notch up 23 countries in a journey of extraordinary contrasts and challenges.

First there is the physical challenge: averaging 100km (62 miles) a day for 230 days Will admits was an “aggressive” plan. “Because of the situation in Ukraine we had to reschedule our route, adding 1,600km (994 miles), which meant we had to pedal a bit faster in Europe,” he explains.

Reaching Istanbul five days ahead of schedule after 31 days on the road and only three rest days, Will admits his hands were losing sensation and his legs “felt like they were falling off”.

Conditions are tough – from Turkey onwards cycling in up to 40C across mountainous terrain. A UB water purifier is Will’s top bit of kit as the cyclists each need to drink six litres of water a day.

In addition, Will and Johan face 50 days on the desert freight roads of China with just a satellite phone for communication. “Cycling in America after that will feel like we’re on holiday,” Will laughs.

Some challenges are predictable: the daily four-hour slog packing and unpacking and the search for food, for example. Others are less so: fending off Turkish shepherd dogs pursuing them at 40kmph (25mph) is one of Will’s less happy memories.

But there are many high points: “The alfresco lifestyle and wild camping miles from anywhere is both liberating and memorable,” Will says.

Meeting people along the way has been rewarding, too. “In every town there have been shouts of ‘Welcome’ from the rooftops, school gates, truck windows and street-side cafes. We have felt like celebrities,” Will blogged.

The farmer’s son has noticed the changing cropping patterns and seasons across Europe and loved the “almost medieval” villages of Serbia.

A rare joy is relaxing for a moment. “The tour feels like a full-time job.” Will says. Not only are Will and Johan completely self-sufficient, with no sponsorship or back-up crew, but every spare moment is taken up with blogging to keep followers updated and spread news of their trip.

However, the pair keep spirits up by singing along to music from the 90s, and are cheered by the many messages of support from across the world. At the end of May, they were “over the moon” to hit the half-way point in their fund-raising target.

Tourdechaz was always going to be a stag night with a difference for groom-to-be Charlie Eaton, UK and Ireland sales manager for Claydon Drills, Newmarket, Suffolk.

With his brothers Tim and Tom, and best man Nick Miller, Charlie planned the cycle ride from Trafalgar Square to the Eiffel Tower in memory of his mother Rachel Boyt who died of a brain tumour in October last year.

The trio wanted to raise funds for Macmillan Cancer Support and to build a garden at Yewstock School, a school for special needs children near the family farm in Dorset, where their mother taught for 25 years.

“We took an assembly at the school in April,” Charlie says. “It was a real honour to be back on Mum’s stomping ground.”

By the time of the ride, TourdeChaz had already exceeded its £10,000 fund-raising target and Charlie hopes to hit £14,000 before his wedding on 28 June.

What started as a stag do quickly became a family affair, with Charlie’s aunt, Lou Pope, and her daughter Jo joining the cyclists, while husband Chris Pope and son Will drove one of the back-up vans.

The trip went according to plan. “Leaving London was the hairiest bit, but a harder challenge for the Dorset farmers driving the van than for the cyclists,” Charlie laughs.

The biggest challenge, however, apart from cycling with a hangover after the nightly celebrations at hotels and French B&Bs, was keeping energy levels up.

And Charlie admitted it was hard going straight back to work the following week to organise Claydon open days. Not to mention preparing for the wedding taking place at the Popes’ farm in Dorset. 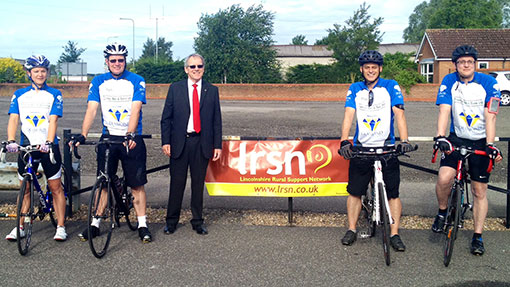 The pressure of doing a charity cycle ride with your boss was a walk in the park compared with the challenge of getting back on your bike for a second consecutive day of long-distance cycling, admits Alison Hindle, marketing manager for fertiliser importers Thomas Bell, Brigg, Lincolnshire.

“We did 97 miles (156km) on the first day,” she says, “so the second leg was tough. I can’t explain how relieved we were when we saw the big marquees for Cereals.”

But the pain paid off for Ali and her three co-cyclists, aka Belly’s Bikers (named after the firm’s nickname, not their cycle-lean physiques!) With managing director Andrew Major, director Matt Dawson, and SJS Agriculture MD Simon Sands, Ali raised more than £2,500 for Lincolnshire Rural Support Network (LRSN) by cycling from the Thomas Bell Country Store in Brigg to the company’s stand at Cereals 2014 held at Crishall Grange, near Duxford, Cambridgeshire.

“Even working in the industry I had no idea of how much LRSN does to help the farming community,” Ali explains. “When I learnt that the charity supports more than 100 families a year facing emotional, as well as financial and business problems, I felt I had to do something to help.”

Ali was inspired to get on her bike. She may be bruised from falling off it, but she was quickly dusted down and is still smiling at the support given to the ride through Lincolnshire’s rural lanes.

“When I fell off, we stopped to get a plaster at a tea shop,” she explains. “Everyone was so hospitable and we’ve been overwhelmed by support all along the way.”