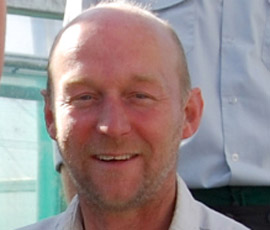 Prominent members of the farming industry have been recognised in this year’s Queen’s Birthday Honours List.

Harper Adams University’s grounds manager Mark Hall was awarded the British Empire Medal for his exemplary service to the university since he joined in February 1981.

The team also maintains all the machinery and equipment and supports other departments across the university.

Mr Hall (pictured left), who was recognised for services to Land-Based Higher Education and to the National Vegetable Society, said he felt “honoured”.

“I am lucky to have a job that is so varied and interesting, and I am also lucky to have such a great team of people around me,” he added.

“Vegetable growing is my hobby and it is that hobby that led me into a career in horticulture.”

Somerset farmer Allen Cotton, of Glastonbury, was awarded an OBE for services to agriculture and to the community.

Lincolnshire pig farmer Meryl Ward, a member of the Farm Animal Welfare Committee, was awarded an MBE for services to the improvement of pig welfare.

John Oldfield, managing director of Raynham Estates, in Fakenham, Norfolk, was awarded an MBE for services to the farming industry and the advancement of farming practice through research.