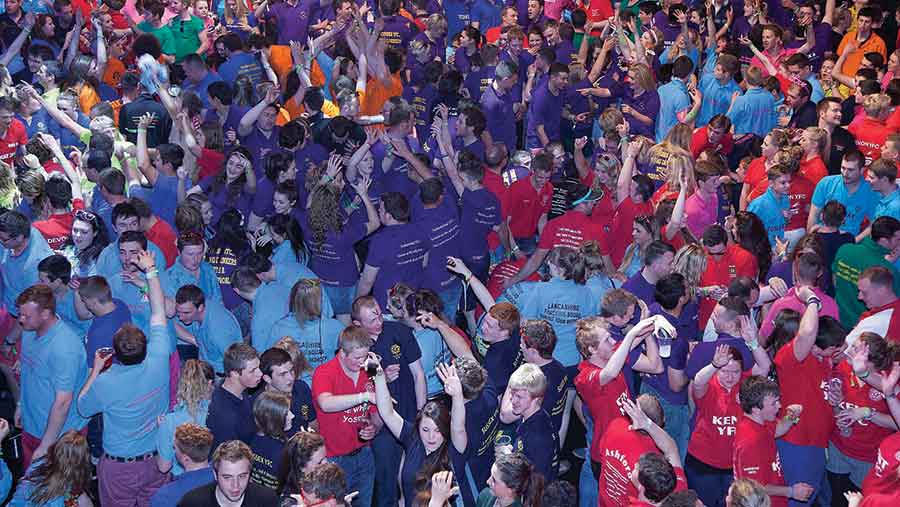 Being a member of a Young Farmers’ Club (YFC) gives you lots of experiences and opportunities.

With parties aplenty, YFC is one of the most social organisations in the countryside and the annual convention, held in either Blackpool or Torquay, is the biggest party of them all.

But Young Farmers also has a more serious side, helping its members to gain invaluable knowledge, skills and contacts.

Here, five young farmers share their stories about how YFC membership has benefitted them.

For many young people, growing up in a rural area and spending many hours working on a farm can be a lonely experience.

That is why YFCs, with their strong support networks, are so important to the well-being of young people in the countryside.

Socials range from club level through to the annual convention at a national level, and activities can range from pumpkin carving to paintballing and parties.

One Young Farmer who has benefited from an improved social life as a result of signing up is Matthew Tucker (pictured above, second from left) from Neath in Glamorgan.

Matthew says: “Before Young Farmers, I was heavily involved in motorsport and even centred my degree around it, which had me leading a fairly busy life with little social time available.

“When I packed in the sport, I needed something to occupy my time. My best friend had been a part of YFC for many years so it seemed an obvious choice. Since then my social life has turned on its head completely.

“There is something to do every night of the week across the county if you wanted to. I don’t think I have missed a club night since I started and activities here range from the cinema to sports and outings to cater for the various age groups.

“I have also gained a large but close-knit group of friends that I could not do without. I have only been in YFC for three years but I believe with an organisation such as this you can do, and achieve, so much in a short space of time.”

Competitions are a brilliant motivator for club members to have a go at something new and broaden their experiences.

From judging stock to singing and cricket to cookery, each year the NFYFC competitions programme includes a mix of traditional rural and agricultural activities.

Competitions cover such areas as sport, art and vocational skills, as well as those that help develop public-speaking talents – for which YFC members have become renowned.

Since she joined her local club six years ago, Eleanor Holme, of Skelton, Cumbria, has been a regular participant in club, county and national competitions. From street dancing to Junior Member of the Year, Eleanor has done it all.

Known as “Nen” to her friends, she says: “My first competition in 2009 was badminton. Amazingly, we got through to the national finals. Since then, I have entered various competitions each year – and participated in many national finals.

“The standard at the national finals in all of these competitions has been so high and I was very proud to have even been there.

“All of these opportunities have been amazing. They have given me so much confidence and I have learned new skills from everything I have done.

“I’ve not previously had that many opportunities to get up on a stage to sing, act and dance, but through taking part in the Young Farmers pantomime, the entertainments and the drama competitions, I have been able to do that.

“Also, taking part in Junior Member of the Year helped me to practise interview and presentation skills. But most of all, I have had so much fun.”

Young Farmers have travelled far and wide, experiencing different cultures, meeting different people and getting to see how farming is done across the globe.

Thousands of members have taken part in the travel programme since the dawn of YFC, tackling white-water rapids in Canada, shearing sheep in New Zealand and building schools in Uganda.

One member who ventured all the way from Shropshire to Australia is Angharad Thomas from Whitchurch.

“Being the other side of the world, I got talking to a few people who had strong connections back home and I met up with some of them later during my exchange, which was great. It was really a home from home,” Angharad says.

“Some of the main highlights would have to include going on the north-coast tasting trail, feeding a wallaby, meeting a koala and getting a 950-head dairy herd in for milking on quad bikes.

“But the main highlight of all was the people who I was fortunate to spend time with. I met some of the most amazing people and have made memories that will stay with me forever.

“I have gained confidence and learned a lot about myself while being away, broadened my opinion about general day-to-day life and experienced things that I would never have done otherwise.

“If you have the opportunity to go on any exchange then take it with open arms as I’m sure you will have the time of your life, like I have.

“If I could, I would do this all over again tomorrow.”

The NFYFC was established to advance the education of its members and their knowledge of agriculture, rural issues and country life.

Interacting with government bodies and industry leaders, the foundation aims to be the voice of the UK’s rural youth and the next generation of farmers. It also aims to promote agriculture as an attractive and viable career choice.

Gemma Parkinson of Corringham, Lincolnshire, believes that the life skills and vocational training she has received through YFC have helped her secure a career in agriculture.

“I’m not from a farming background but, after a lot of hard work, I have just secured a job as a farm secretary on a large farm in Lincolnshire and next year I will be studying for a part-time degree around my job.

“Eventually, I would like to become a bovine nutritionist,” she says.

“I feel so lucky to have been given this opportunity and I honestly don’t think it would have been possible without the skills and experiences I have gained from being a Young Farmer.”

Young Farmers is led by young people, for young people. That means that the members themselves have to run their clubs and events.

Being part of a club, county or national committee and taking on a role such as treasurer or secretary can help develop an abundance of skills, not least leadership and teamwork.

The NFYFC has also set up courses and built resources to help members with more specific training.

Richard says: “If I had to put into words how Young Farmers has developed my skills in everyday life then I would have to write a book.

“Obviously the main skill that most Young Farmers would say they have learned is the ability to socialise. Over the past two years I have learned a great deal.

“Recently we have been organising events to raise money for our club building, as Butsfield is one of the few clubs to own their own premises.

“I have learned about planning, communication, public speaking and organisation, which in turn helped me organise my own life as I have taken on more responsibilities as I get older.

“Last year, I obtained an honours degree in agriculture without any A-levels, which would not be possible without Young Farmers.

“Because of the training I have received with Young Farmers, I am now chairman of Butsfield YFC and very proud. I’m also an NFU county representative and have met people I would never have been in contact with before, from land agents to electricians.

“If you have just joined Young Farmers or are thinking of joining and may be slightly shy, the best way to get involved is to compete in speaking competitions, as they give you skills that you will use forever.”