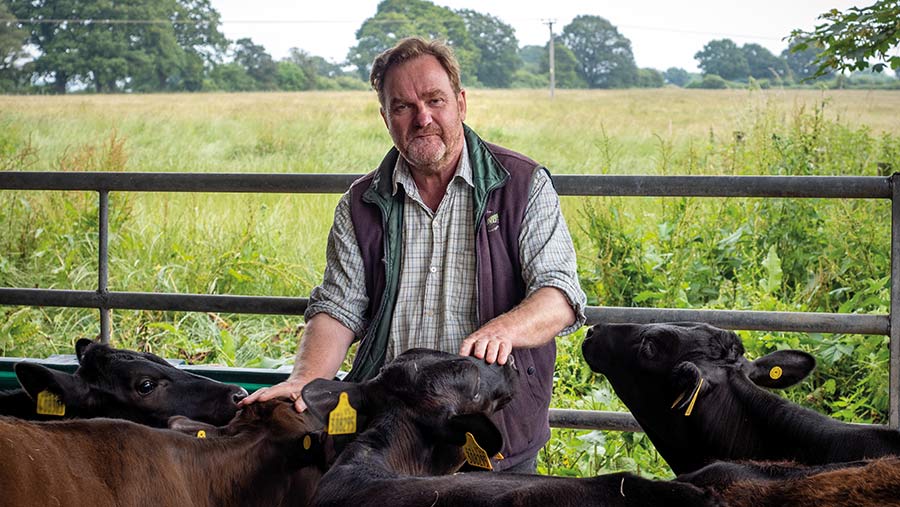 Here’s another thing that baffles me about muck. (Sorry to keep going on about it – but everyone else is.)

When did it stop being the epitome of bucket chemistry, and start becoming a scientifically precise input?

A lifetime ago, when we were confident of having the pastures to ourselves and that gates would stay shut, we ran two herds of 80 store cattle.

Just-weaned calves would arrive in the first week of January, and be kept in the yard and barn for four months.

We’d muck them out in March, and again after May turnout. As a result, we had a huge muckheap.

Some months later, Dad would hire a trio of barrel spreaders, and several days of fragrant mayhem would ensue.

The idea of quantifying how much muck was being applied per hectare (acres, back then, of course) would have seemed hilarious.

As muck would have it

Barrel spreaders had minds of their own, and had application rates that varied from “diddly squat” to “deluge” in the blink of an eye – certainly quicker than you could change gear in an old Ford 6600 to try to match the rate.

Even well-rotted muck had a variable consistency that would have defied chemical analysis. Some of it would still effectively be straw, some of it almost slurry.

The chosen field would look a bit sorry for itself if conditions were good; in a wet year, it looked like the Hampshire Somme Re-enactment Society had been in.

Hurrah for Ken with his Ransomes to restore some sort of earthy order.

The other day I got an email from Hazel, hard at work in her office complex down in the South Wing. “Can you print this off for me?” it asked.

(I’ve got the only printer in the house, which, after the shower, is the hardest working bit of kit on the farm. Remember when the future was “paperless”?)

It was her Manure Management Plan. It was, of course, full of useful advice such as “don’t spread muck down the well” or “in woodlands”, but it also had an “area required” section, with a column saying how many hectares were needed by each “stock unit”.

Curiously specific, and takes no account, as far as I can tell, of our FYM’s inherent inconsistency. Or the wild and wacky things that sometimes make their way into the muckheap.

I should be so mucky

Mac the Contractor’s spreader – one of the proper battleship sized ones – made a right Horlicks of a sheep hurdle that wasn’t rescued from the barn in time. Yes, I know such forms are the modern way, and have to be done, but I chuckle at the metamorphosis from “muck-it chemistry” to “thousandths of a hectare”.

So it was very reassuring to see Farmer Focus writer Charlie Cheyney (my young neighbour and a rising star in the farming world) talking of issues with inconsistent organic nitrogen application.

He had stripey wheat after slurry, and was blaming lumps, blocks, sand in tankers and steep slopes. At least he wasn’t blaming a sheep hurdle.

And he’s a keen-as-mustard nipper using the very latest monster kit – not a Ford 6600 hauling a worse-for-wear flail spreader with most of its chains baler-twined to the central shaft.

Meanwhile, after I’d done liquid N on 270 acres of spring barley last week, I had 50 litres in my sprayer. I diluted it a bit from the clean water tank and ran it out on the headland.