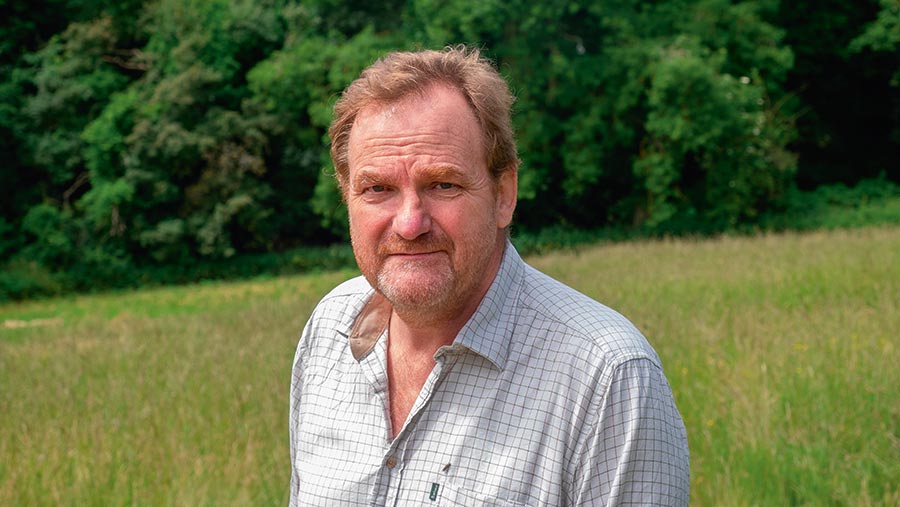 If we ignore the fact that I narrowly escaped setting half of Hampshire alight, growing winter barley was one of the most satisfying and relaxing arable jobs I’ve done for many years – and much of it comes from the fact that we decided to take a break from aiming for a premium.

For years we struggled with winter malting barley, treating it with kid gloves, coddling it for 10 months, only to find it got rejected for being too prickly, or too yellow, or any number of reasons.

“Sod that for a game of soldiers,” I thought. “Let’s just sow some simple two-row feed barley – and lots of it.”

It helped that the previous wheat crop was combined, carted, baled and cleared in perfect conditions, and 150 acres were billiard-table smooth.

The stubble had a squirt of glyphosate in mid-September to tidy up the minimal volunteers that the brilliant combine driver had left behind and, by 5 October, the whole lot was Horsch CO-ed straight into the stubble and rolled.

If it had been a malting crop, there would then have been the long debate about fertiliser rates.

Put on too little, get a good malting sample, but not a lot of it; put on just too much, get a moderate yield rejected.

And there’s the third outcome: getting the N right, but it being rejected because there’s a Y in the month, or Mars is in Uranus. No, this year, because it’s feed barley, we’ll put a proper whack on and be done with it.

With a month or so to go until harvest, a lovely gently yellowing crop was tarnished by strips and patches of green. The strips were the tramlines – the legacy of doing late field work with standard-width tyres.

Other patches of green were volunteer wheat – not sure how they had got there, but in places they were quite thick, particularly in what look like skylark plots, but are in fact where the Horsch rotor jams occasionally.

In a malting barley crop, they would present a problem – no glyphosate allowed, and green wheat in the sample.

But because it’s feed barley, it had another dose of glyphosate and the stopwatch started for harvest.

We were in it a week earlier than usual, and the chalky fields did about 3t/acre and the heavier land 3.4 t/acre. (Trinity Grain weights, not pub weights.)

And the straw? Let’s just say that the man who bought it “by the acre” got his money’s worth.

For us, those yields are astonishing. The price will, as a consequence, be terrible, but that’s an inevitable fact of farming.

The curious thing is that the same might be happening with our wheat.

The mill in Southampton shut recently, and transport costs to the next nearest one will make a huge hole in any mediocre premium over feed.

The days of prioritising milling wheat over all other crops, chasing that elusive Hagberg, giving it extra inputs and carefully timed late N, might be over.

And let’s not forget that attempts to combat the bruchid beetle in the beans were thwarted by a carpet of buff-tailed bumblebees which simply refused to go to bed and let me do some insecticide.

I can’t see that sample heading off to the Middle East for human consumption.

So, after nearly 30 years of chasing and being proud of occasionally getting the premiums, we might stick with standard crops.

A wise farm-wide strategic decision driven by hard facts of agricultural economics, or a sign of age?

Let’s pretend it’s the former when we know it’s the latter.