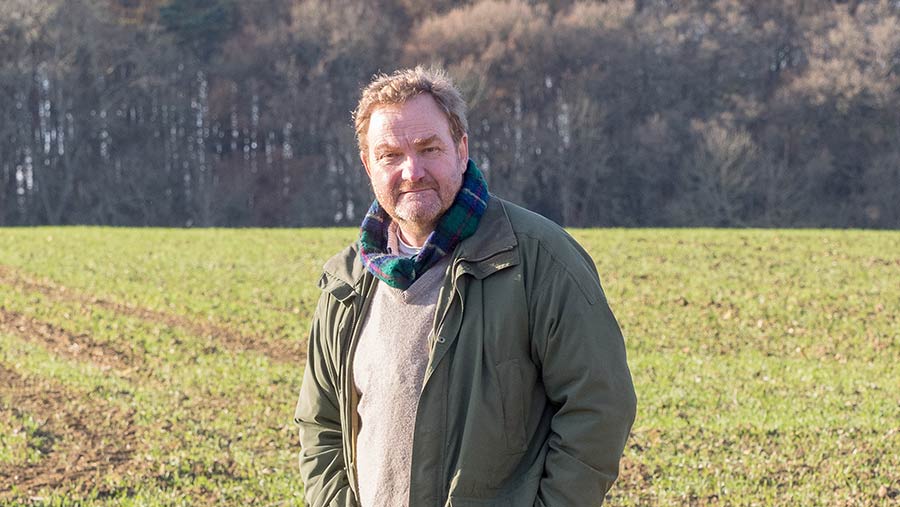 With a long sigh, and a reluctant mind, I’ve ordered my pea seed. It’ll be for Blackhouse Road – a field that on the original cropping plan for 2018-19 was destined to be the second half of our oilseed rape area, but the bugs soon changed all that; I used its seed up redrilling the first block.

We grow peas every four or five years, usually when the rotation goes a bit squiffy, and in a world full of uncertainty, I know precisely what will happen over the next few months in Blackhouse Road.

Once the spring settles down a bit, I’ll give the bare stubble another dose of glyphosate, and then ring neighbour Robert, who will arrive with his Kickerl Kocklinger Kucklong Kinklogg huge cultivator and turn it into a seed-bed.

A few warm, windy days later, I’ll be out there with the drill, enjoying the views from the highest point of the farm.

I’ll take the opportunity to turn the tramlines 90deg, to give satisfying six-furlong turns. The lovely Mrs Flindt will drag the rollers out of the bushes, and by the time the two of us have finished, it’ll look an absolute picture.

Then the pigeons come

One tank of very expensive pre-emergence herbicide will put Blackhouse Road to bed nicely. There will then be a slight panic as a minor drought sets in (although this will soon be handy for the manufacturers of the pre-em), but eventually the green shoots will emerge – and the pigeons will arrive.

Also arriving will be another neighbour – a fanatical pigeon shooter – who, despite years of instruction, still hasn’t got the grip of “drive on the tramlines”.

Luckily, his lightweight 4×4 makes no mark. He’s better than the gas bangers, though – as the latter tend to vanish into a white van quicker than you can say “misunderstood minority”.

After a few more weeks, the weeds will start to emerge, and, of course, the drought will be to blame for the pre-em not working.

Blackgrass will also emerge, and an application of eye-wateringly, scrotum-shrinkingly expensive herbicide will be applied.

This too, will not work, but that’ll be due to wrong nozzles (“You should have used whatever you weren’t using”), ley lines or possibly astrology excuses (“Mars was in Uranus that week”).

By June, the whole field will be an even, dense mattress of beautifully interwoven shoots, stalks and tendrils.

It’ll be thigh high, and I’ll persuade myself that, despite choosing this variety on its availability rather than standing power, combining will be a doddle. Lifters? Pah! There’ll be big money to be made from baling the haulm this year.

I’ll make a couple more trips through it with fungicides and insecticides, and that’ll be it. Job’s a fish.

The good Lord will have none of this, though, and a couple of weeks before harvest – or even once we’ve done the headland – the heavens will send a meteorological steam iron through the crop. The big man upstairs might throw a bit of hail and thunder to add to the biblical magnificence.

It’ll be on with the lifters, and then Operation Stiff Neck will commence – four or five days getting the crop off the deck, while avoiding huge flints and gas cylinders that we thought had been nicked.

The haulm will be useless, the yield dismal. “Is that it?” Hampshire Grain will cry after the second lorry has left. Still, the next year’s wheat, direct drilled into a nitrogen-rich, friable seed-bed, will be magnificent.

And next time a light field needs a break crop, I’ll find myself asking “Why don’t we try peas again?” Just not for a couple of years, though.