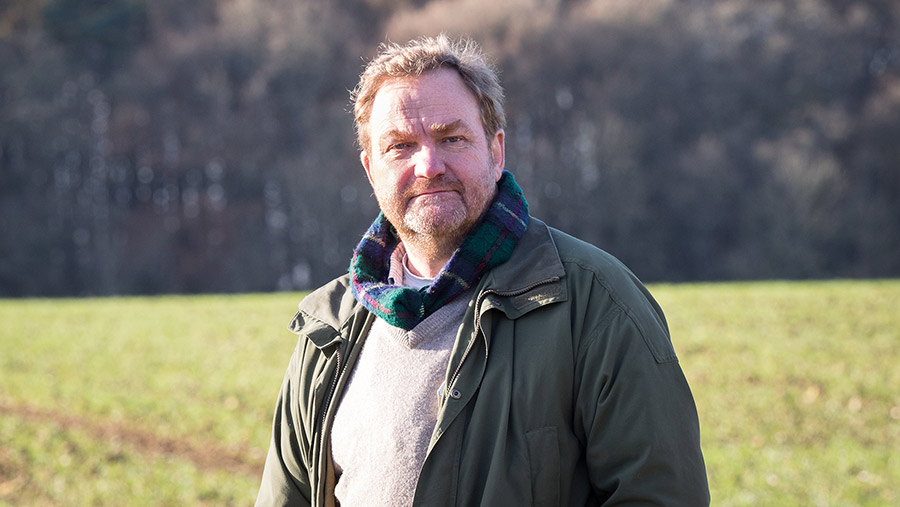 Halfway through a long session of Trailer Shuffle, I realised what a flipping brilliant invention the pick-up hitch is.

“Trailer Shuffle?” you ask. It’s what you do when the seed cleaning gang are on their way with their clever little unfolding lorry.

You start with four trailers. First, an absurdly large bale trailer that we’ve been lent by a Christmas-tree-selling neighbour while he uses our handy little single-axle one in his plantation.

Next, two 10t grain trailers full to the brim with last harvest’s beans – one spring, one winter – and last, an aged three-tonner with more spring beans in it.

At the start of the shuffle, the grain trailers could be anywhere on the farm. They’ve been parked up safely, out of the way, since the last sweep-out of harvest.

The bale trailer is easy to get to, as it has been doing seed carting, but is still rather forlornly loaded up with 6t of Zulu.

A disastrously wet session on the clay a couple of days ago means we’re waiting for some drilling “on the frost” sometime between now and the end of the vernalisation season.

The mission is very simple: take the bale trailer down to the bottom yard to get it out of the way, and then find and park up the three grain trailers ready for the lorry.

These days, once you’ve plumbed in the hydraulics for the extending hitch, you hardly have to leave the cab.

There was a time (gather round close and learn, kids) when we used trailer jacks. The tractors all had fixed clevis hitches, and the trailer drawbars had to be raised and lowered to match.

These jacks ranged from slightly knackered to totally knackered; they’d be rusty and hard to turn, or bent – or broken – after contact with a lower link arm on a tight turn.

One well-known make of the 1970s had a fold-over jack handle that skinned your knuckles on the trailer body when open, but had no leverage at all when shut.

And every trailer carried an old disc – the bigger the better – which went under the jack to minimise sinkage in the field, if you were forced to unhitch on bare soil.

In the mid-1980s, a Ford 7610 four-wheel drive arrived, and it had one of the new-fangled pick-up hitches. And, as was typical with the old boys of the time (and that includes Dad), everyone refused to use it.

Turn of the crew

But slowly, ever so slowly, the fresh-out-of-uni boy (me) managed to persuade everyone how good they were. Big trailer eyes and skids were welded on.

Dad even grunted his approval when he saw one in action – and that was as enthusiastic as he was ever going to get.

We take them for granted, now, of course. It’s a shame they’ve got harder to use recently with all the stuff sticking out the back of the axle.

But with a bit of stretching and groaning, and the odd well-placed mirror, job’s a good ‘un. Not a bleeding knuckle to be seen.

In fact, I can never work out why the pick-up hitch doesn’t win the “most significant farm invention” competitions when they appear.

The mobile phone inevitably wins that one. Although, come to think of it, maybe that isn’t too much of a surprise.

How else would I have found out, just as the last trailer was being dropped neatly into position, that the seed cleaning gang had had a bad day, and wouldn’t be in until tomorrow?

Time to put them all away, and get them out again in the morning. Thank goodness for the pick-up hitch.