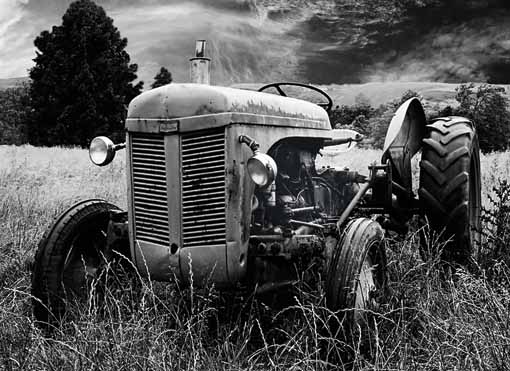 Farmers Weekly has announced the “winner of winners” in its prestigious 2011 Photography.

The ultimate accolade was scooped by a beautiful black-and-white shot from Jean MacDonald of Craven Arms in Shropshire.

– the tractor that, with its pioneering hydraulic three-point linkage, revolutionised groundwork after WWII and so became the backbone of arable farms across the country.

Having already taken the top spot in the arable category, it went head-to-head with the other six category winners to vie for the overall top spot.

“The entries were all lovely – such good quality,” says E.ON’s Daniela Federici. “One, however, instantly moved me – it’s so emotive and captivating. The stormy sky and the dilapidated old tractor suggest a very dark and moody atmosphere, which made me feel quite emotional yet still managed to make me smile. Simply beautiful.

“Back in its day, this model of tractor represented a technological breakthrough and, although the image is titled ‘Abandoned’, it reminds us how much farming has always changed. Today’s cutting-edge technology is building on that rich heritage.”

Jean came across the Fergie in a field while out walking with a friend.

“I sensed an air of mystery around the tractor,” she says. “When was it last used? How did it end up in the corner of the field? What did it look like when it was new? How old was it?

“I converted the image to monochrome as I felt it added power to the image and portrayed a sense of ‘time gone by’.”

See all the category winners and highly commended entries