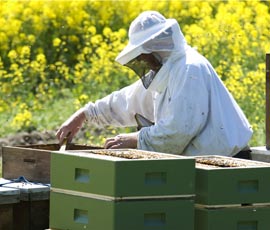 According to the first Scottish bee health survey, the number of beekeepers experiencing loss increased by 40% since 2011-12.

Extreme weather, queen health, starvation and the varroa mite, a notorious killer of bees, were identified as the main risk factors.

However, the report did not cite pesticide use in agriculture as a reason for the decline.

Rural affairs secretary Richard Lochhead said: “Bees play a valuable role in our nation’s ecosystem acting as pollinators for many crops and wild plants – as well as producing honey and other products.

“The health survey published today shows that this winter has been a difficult one for many beekeepers and large numbers of colonies have been lost.”

The highest losses were recorded in the Highlands with the lowest in Tayside.

Varroa mites were discovered in all nine regions inspected although mite-free areas may still exist in Scotland.

Pollinating insects are estimated to be worth around £430m to the UK economy.

The Scottish government plans to repeat the survey annually to monitor any changes in bee health and to provide information about the spread of diseases throughout Scotland.

The report was commissioned by the Scottish government to monitor the effects of husbandry and disease. A random sample of Scotland’s 2,400 hobby beekeepers and 25 commercial bee farmers were polled.