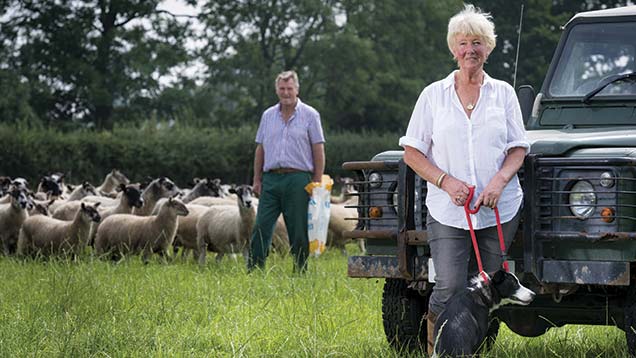 Ahead of me on the lane as I returned from an emergency dash to local shops, our battered green Land Rover was moving at an infuriatingly slow speed.

Craning my neck to try and peer past, I glimpsed Fizz, our border collie, calmly trotting from side to side as she shepherded our last remaining hoggs back to the farm.

To encourage the whole group to move at a faster pace, John was leaning out of the window to shout encouragement, instructions or even the odd derogatory comment to Fizz. She knows her job better than he does, though.

The occasional sharp nip was all that was required to stop any of her charges silly enough to stray off track. The hoggs know who is boss and soon all moved with military precision off the lane and into the farmyard and buildings.

John’s exertions in this case were limited to changing gear and shutting a barn door. Fizz’s efforts had left her eager for praise and she leapt into John’s arms for a well-earned cuddle.

This mechanised herding technique is practised by another of our farming friends as he brings his cows from field to milking parlour in the summer. He weaves back and forth across the road behind the herd on a quad bike.

The cows, however, are wise to his game and will not be hurried. They judge to the split second how long it is for them to keep eating the fresh grass at the wayside and when it is prudent to move forward.

While the boss is on his vehicle they know they are unassailable and munch away at these forbidden delights.

When he leaps gesticulating from the bike they lumber on a few more yards. Then grind to a halt as soon as they see him get back on.

Luckily his village only has local traffic passing through as this cow herding method is not always appreciated by the motoring public.

At 20 years old, our current Land Rover is soon to be retired. This March we hope to be taking delivery of a brand new Land Rover purchased through Tyson Cooper with the help of a discount scheme run jointly by BASC and the NFU. I fear, however, that my use of the new vehicle will be severely restricted until I can prove my trustworthiness as a driver. This has according to John, not always been proven.

The most vivid example of this, for him, took place quite a few years ago. That particular morning I had gazed in horror from our bedroom window at the drifts of snow that covered my car after a furious blizzard during the night.

As I only had limited time to dig my car out in order to get daughter Jo to school, I hesitatingly enquired if there was the remotest chance of being allowed the keys to the most treasured of John’s possessions, the Land Rover, which had, unlike my car, been carefully garaged in a barn and stood pristine and snow free.

“We’ll see,” registered at that stage. Education being clearly a lower priority than his vehicle.

At breakfast, after John had encountered several bad-tempered cows in the milking parlour (those were the days) and equally stubborn calves that refused to drink from the bucket, I repeated my request. Bacon and fried bread were eaten in silence. Intense deliberations were clearly taking place.

Eventually, after enough time penalties being set on my return to rival an RAC rally, the keys of the Land Rover were mine. For seconds I considered that this tender concern was on my behalf. But the sight of his lovelorn eyes following me out to his vehicle were for the Land Rover’s chassis and bodywork. Not mine.

This wondrous vehicle also saw, and sees, duty as a hearse, dog kennel, fitter’s van, fuel and stock transporter, lunch wagon and tow vehicle. Even once a wedding limousine when John was best man for his mate, John Nutt. Mind you it had to be washed that day. And even had the indignity of being decorated with flowers on the bull bars. On this occasion however as school bus, it got us there safely, confidently negotiating the snow-packed lanes.

Checking my metaphorical stopwatch on the return journey so as not to incur the wrath factor on time penalties, I noticed the warm air blowing from the heater had taken on a decidedly icy chill.

A few miles from home the needle for the engine’s temperature shot dramatically into the red. Steam spurted from under the front bonnet. Horror struck as I pulled on to the forecourt of the only garage between the farm and school.

My mind was numb with the possibilities of what damage I might be inflicting on such a highly tuned beast. The Land Rover as well.

My quick action had forestalled any damage to the engine, but it appeared that John’s tender loving care for his Land Rover had not extended to putting the correct amount of antifreeze into the radiator. Instead an empty bag of calf rearing mixture had been tucked under the front grill to keep out the cold.

A tense hour to thaw out the engine was followed by explanations to a disbelieving husband. Keys to the Land Rover were out of bounds for months. Took a whole new set of Brownie points before I was allowed behind that wheel again.