The latest version of the Toyota Land Cruiser, due to go on sale on 1 December, will be offered solely as a five-door model with seven seats, though the LC3 model has five seats with an optional third row.

Power comes from a revised 171hp 3-litre D-4D diesel engine with five-speed automatic transmission. A three-door model and a 4-litre V6 Dual VVT-i petrol engine will be available in other European markets, but there are apparently no plans for these to be offered in the UK. Combined cycle fuel economy is 34.9mpg and CO2 emissions are 214g/km.

The front independent double wishbone and rear four-link lateral rod suspension systems have been revised for extra comfort and steering feel, says Toyota. LC4 and LC5 models grade models are equipped with a new electronic Kinetic Dynamic Suspension System (KDSS), which adjusts the front and rear anti-roll bars for to get the best off-road performance. 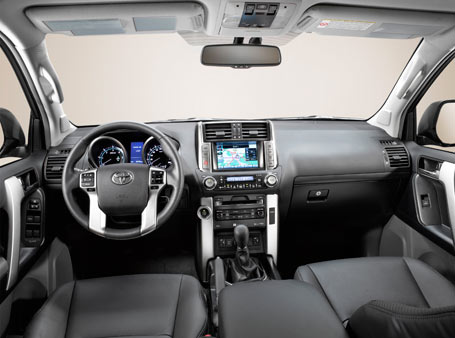 New Multi-terrain Select system automatically controls power and braking to boost performance on surfaces. At the same time, the Multi-terrain Monitor feeds images from around the vehicle from four cameras to provide the driver with more information about the immediate surroundings. The new Steering Angle Display shows the position of the vehicle’s wheels and its predicted path, further helping the driver plot a safe route.

The Crawl Control feature lets the driver choose from five different setting to optimise vehicle set-up to tackle even extreme conditions with precision and control, without having to use the throttle or brake pedals. Crawl Control will also help the driver free the vehicle if it gets stuck in mud or sand.