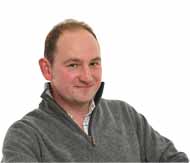 Farmers tell people that they grow food. It’s not strictly true, though, is it? On most of our farms, it’s soil and weather that “grow” things. Our job is just to put the seeds in the ground and then harvest what grows in between the showers.

We are Mother Nature’s stagehands, adjusting the set between scenes. Probably that’s a bad analogy; stagehands wear black polo neck jumpers and move quietly. When we shift our props across the countryside we use flashing beacons and escort vehicles. For some farmers, this is the performance itself.

Like stagehands, most of us have a bit of waiting around between the main acts. Dairy farmers get a few hours between milkings, arable farmers get the nine months between October and August.

Affording to retain staff during these quiet periods is one of the chief challenges of running a farming business. This is why farming never became properly corporate – family members have a flexible attitude to work patterns and can forgo the UK’s generous statutory employment laws.

Now, it is one thing to have tractor drivers unprofitably playing dominoes in the workshop for a couple of months; in horticulture quiet spells are even more challenging. In my field of experience – cut flower production – labour needs are particularly erratic. This is why the majority of UK purchased flowers are produced in East Africa. It’s not only because you can employ good workers for $6 a week, it is also because the altitude and equatorial location receives consistent daylight and temperature throughout the year – their flower production and staffing requirements are stable.

Now that the concept of domestic production is being taken seriously, we need to consider how to manage the irregular supply patterns of UK grown crops such as vegetables, salads, soft fruits and ornamentals. Labour needs are one of these challenges.

Throughout history and across most continents, it has been necessary to use itinerant labour in agriculture. This situation has helped to spread knowledge and prosperity. Although it is unfashionable, I proudly defend the role of migrant workers. The British workforce lost their taste for bending over many moons ago and the fresh produce industry now favours migrant labour. Eastern Europeans are closer to their agriculture and see no stigma in farm work.

I take particular pride from having employed a flower cropper on piece work who earned more than the president of Latvia. I actually fear the consequences if we were ever forced to employ de-skilled and unwilling British citizens instead.

The system of gang labour is not perfect and our system needs to better recognise the role and necessity of transient work.

In a time of rising unemployment, good agencies – which can find work for their staff by moving them between production peaks in different sectors – are performing a valuable social and economic role. They should be praised and not vilified.

One of the main problems is that VAT is currently levied on agency staff. This is state symbolism – it labels workers as a product and not human beings. Worse still, it gives crooked gangmasters another 20% to steal and spend on BMW X5s. This should be zero-rated in the next budget.

Maybe one day all fresh food crops will be grown indoors in controlled environments with programmed production. This would enable farmers to offer stable, permanent employment to the workforce. In the meantime, we have to accept that managing seasonal work is one of the costs of cheap food.

Read more from Matthew and the other Farmers Weekly columnists.