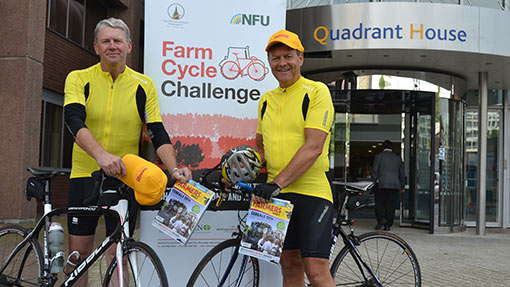 The pair, who are covering more than 1,000 miles in 11 days, were greeted by the FW team in Sutton, Surrey.

Pedalling from Skelmersdale, Lancashire, to Kenilworth, Warwickshire – and calling in at every NFU regional office in England and Wales en route – they’re raising money for four farming charities.

The duo set off on June 16, making their way clockwise around the country, with the aim of arriving at the finish line, NFU head office, on 27 June.

They’ve already raised more than £25,000, which will go to the Royal Agricultural Benevolent Institution, the Addington Fund, the Farming Community Network, and Farm Africa, which works to end hunger and poverty in eastern Africa.

“People have told me I am mad to be even thinking about completing this challenge – mainly because I have only owned a bike for a few weeks,” said former NFU president Peter. “But I am really up for the challenge.

“During my time as president of the NFU, I had many requests to take part in fundraising challenges, but I resisted because of the day job.

“I have become seriously out of condition over my years at the NFU and my kids have been relentless in their condemnation of my decline!

“There is some fantastic work being done by these charities. The recent flooding crisis in parts of the country and the overwhelming response to that is testament to the importance of rural charities such as the RABI, FCN and Addington, working tirelessly to ensure rural communities and farmers have a safety net during times of trouble.”

Richard, who is chairman of the Oxford Farming Conference, said: “These challenges are a great way to see the countryside, get fit and raise money for four excellent agricultural charities. 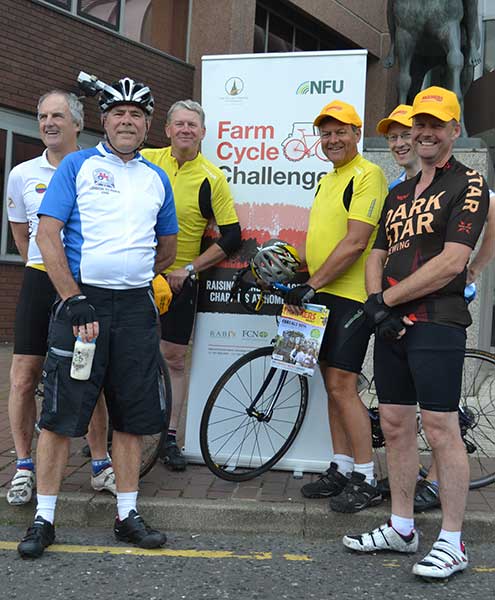 “There are always people worse off than we are and it’s good to have the pain of a 1,000-mile cycle ride to help ease the pain for those who are not so fortunate. These four charities make a real in-the-field difference to people’s lives in our industry.”

He added: “I must have hit that midlife crisis point in my life when I’m still trying to hang on to my youth. Hence a soft top car and cycle challenges!”

Wishing the pair and their support team well, FW executive director Richard Watts said: “This is an amazing feat and these charities do so much great work for farmers both at home and abroad.

“Their importance has been underlined this year in particular when so many farmers have needed assistance because of the terrible winter flooding.”

Donate to the Farm Cycle Challenge