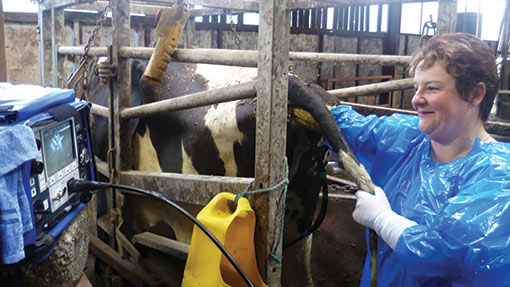 The Wilkinsons’ pregnancy scanning firm comprises three sisters and a lady from New Zealand, with father Tim the only man on the job.

The company scans about 400,000 ewes a year across the UK, and many more in New Zealand, where the second eldest, Sophie, lives for 11 months of the year.

It all started when eldest sister, Samantha, was 16 and began to help Tim out. “Dad was so busy he suggested I come into the business,” she says.

“He trained me up and I drove him around the country – I did 6,000 miles on L-plates. It’s a funny old thing to get into; to be good you need to be accurate and to be accurate you need experience. It took about three years before I could go out on my own.”

Tim, who is a commercial light aircraft pilot when he’s not scanning sheep, also designed mobile sheep dips and scanning crates for many years, and invented an upright scanner with pneumatic gates to make it easier for Sam to handle the sheep.

“You used to have to clip the sheep’s bellies, starve them for 12 hours and tip them up to scan them, but with an upright machine and better scanning technology they just walk through,” she says. “Instead of scanning 100 ewes in a day, you can do 100 an hour.”

Over the years, the middle sisters Sophie and Stacey joined the team, while the youngest, Sasha, runs her own business as a tattoo artist. “Stacey and Sophie just do sheep, while I also scan cattle, alpacas and dogs,” says Sam.

“When I first took on some of dad’s clients, I lost a few to local lads, but when their results weren’t as accurate as mine the farmers came back to me,” she says. “But I haven’t encountered much prejudice – if anything, we get more leeway as we can use our female charms!”

It’s rare for the sisters to work together, focusing instead on their own clients. “When I’m scanning on one hill, my sisters will be on another. But we do work as a big team as well,” says Sam. “The problem with being a female scanner is that you can’t be around sheep when you’re pregnant, so we all helped out when Stacey was expecting.”

The girls like to scan the sheep a bit earlier than others, so that the ewes are not quite so fat. “We like to do them at 30-70 days’ gestation, while others will go up to 100 days,” says Sam. “It is a bit of an art-form; you need to have a good arm and technique to get an accurate scan.”

On her busiest day, Sam scanned 1,500 sheep. During her two years in New Zealand she topped 3,500 in a day. “The flocks are a lot larger over there, and you’re not marking everything, only the singles, empties and triplets.”

The weather can also be pretty grim. “Two or three years ago we were working at -17C in deep snow on the Welsh mountains – but you just have to get on with it,” says Sam. “I think that’s why the farmers like us – even if it’s pouring with rain we bring a joke and smile to the job. We have a lot of fun.”

Now 41, Sam is trying to cut back a bit to ease the pressure on her body. The hours are certainly pretty demanding. “We scan from early November until the end of February, starting at 8.30am on the farm and working until 9-10pm,” she says. “I scan about 60,000 sheep a year; at my busiest I reached 80,000. We only get Christmas and Boxing Day off, and that’s only because I can’t get a farmer to work those days.”

From October to March, Sam scans about 5,000 cows, as well as about 10 dogs a week in the South East. “I do about 40,000 miles a year, but I love the job,” she says. “You meet so many different people and see different ways of living – even if you have a bad job you don’t take it on to the next farm.”

Busy as she is, it’s hardly surprising that Sam met her partner while in a traffic jam on the M25. “He saw me and took the number off my van, and texted to ask if I’d scan him,” she laughs.

“We didn’t meet for four months, but then I took him out cattle scanning – I thought that if he liked me when I was doing that he must be all right. We’ve been together seven years now.”

One farm particularly special for Sam is the small unit near Bedford she bought from her grandmother on which she will run 100 Welsh Mountain ewes. “It’s nice to be able to relate to my customers on ear tagging, paperwork and foot problems – and I now understand even more how important it is for the scanner to get it right.”

Farmers Weekly and Barclays recently carried out a groundbreaking survey into the role of women on farms. With more than 2,000 respondents, making it the largest-ever such research done, it gave a unique insight into the working lives, aspirations and outlook of women on British farms. You can see all the results – and the reaction to them – online at www.fwi.co.uk/womenonfarm

Barclays Agriculture has more than 250 years of experience supporting UK farming, with a dedicated team of more than 100 experienced agricultural managers supporting customers and their ambitions both today and for future generations. The contribution women make to the success of farming enterprises has always been appreciated but often unheard, therefore Barclays Agriculture was delighted to sponsor this research and, for the first time, highlight the value and impact women contribute to the industry.