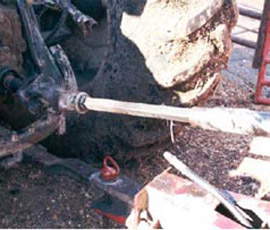 More than 10,000 people each year come close to an accident that might cause injury when working in agriculture, according to a survey by NFU Mutual.

The rural insurer contacted 1,500 people living and working in the countryside. It found that 2.13% reported experiencing a near-miss – equivalent to 10,000 incidents when scaled up to represent the rural working population.

NFU Mutual’s chief claims manager Matthew Scott said: “While the research highlights incidents that didn’t lead to injury, it does show there are too many near-misses for comfort. It proves that your luck will run out sooner or later, showing the importance for everybody working on farms to put safety first.”

The figures were released as part of NFU Mutual’s Farm Safety First campaign, which aims to harness the power of friends, family and partners of farmers and workers to spread the safety message.

Campaign spokeswoman Gill Bolton, who became involved with Farm Safety First after a worker on her partner’s farm was killed, said:

“By involving friends and family members, using real-life examples to highlight the most common causes of farm accidents and providing people with some simple safety tips, Farm Safety First will hopefully prove a catalyst for farmers up and down the country to review their health and safety practices.”

In addition to individual advocates such as Ms Bolton, the campaign also has the backing of organisations including the National Farmers Union, NFU Cymru, NFU Scotland, Ulster Farmers Union, and the Royal Society for the Prevention of Accidents (RoSPA).

Anyone interested in helping to raise awareness of the problem are being encouraged to get “social” and join a social media campaign called Thunderclap – where they can “donate” a tweet or Facebook update showing they back the initiative.

Supporters are being asked to adhere to five simple safety steps:

More on health and safety