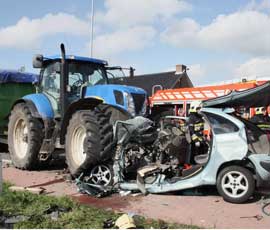 Morrisons is to run workshops on farm safety to help reduce accidents in the most dangerous industry in the UK.

Workshops on farm safety and farmer wellbeing will be held at a series of Focus Farm meetings being rolled out across the country from March this year.

The events, which aim to raise awareness of the dangers of working in agriculture, will address topics that are important to farmers supplying Morrisons, such as using machinery safely and handling of livestock.

More farmers die at work than employees in any other industry and the figures have stayed at the same level in recent years, while comparative areas like construction have improved.

Despite only employing 1.5% of the country’s workforce, agriculture accounts for 20% of fatalities in the workplace and was officially announced as Britain’s most dangerous industry in 2010, based on fatalities per worker.

Over the past decade, 455 people have died on British farms, an average of about one death week, with 1,700 seriously injured in the same period.

Morrisons will also become the first supermarket to sign up to an industry-wide campaign for greater farmer safety.

A total of 21 organisations have come together to form the Farm Safety Partnership, which is chaired by the NFU to offer practical advice, training and guidance on how farms can be made safer.

Some of the most common farm injuries occur through falls and accidents involving machinery or livestock. Morrisons will give advice on preventing these problems through simple adjustments at work.

Martyn Jones, group corporate services director at Morrisons, said: “We are committed to the wellbeing of farmers and that’s why we’ll be organising these safety sessions for our own suppliers.”

Farming minister Jim Paice said: “Our farming industry is the best in the world, but the dangers of working within it must be confronted.

“I’m delighted to see so many organisations signing up to the campaign for farmer safety and would like to add my full support to it.”

NFU director of corporate affairs, Tom Hind, added: “We are delighted to have Morrisons on board the Farm Safety Partnership and we are looking forward to working with them to reduce the tragic accident statistics across agriculture.”

Tell us about your near-misses and read what other farmers are saying on our forum thread.