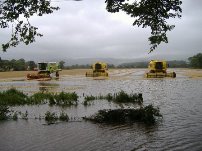 DEFRA is missing a “once in a Parliament” chance to protect Britain from flooding disasters, an influential committee of MPs has claimed.

MPs on the Environment, Food and Rural Affairs committee said the government’s proposed Bill to protect the country from flooding was “confusing” and “poorly drafted”.

In a report published on Wednesday (23 September) the cross-party group also criticised DEFRA for giving too much power to the Environment Agency and ignoring local knowledge about flood risks.

Michael Jack, EFRA committee chairman, said the draft Flood and Water Management Bill relied on a “top down approach” and urged the government to be more collaborative with local residents.

“Individuals and communities affected by flooding and coastal erosion will fight to save their homes and livelihoods,” he said.

“It’s crucial that their concerns and interests be properly taken into account when devising a response to a flooding incident.”

Mr Jack said there was little realistic chance of a refined Bill being passed before the next general election and suggested DEFRA might welcome more time to improve the proposals.

Meurig Raymond, NFU deputy president, said the report addressed many of the union’s concerns about the Bill.

“There is a strong sense of disconnection between the Environment Agency and those on the ground who are affected by flooding and we believe that there has been inadequate maintenance of rivers and defences,” he said.

“We have argued, in particular, that river maintenance through regular cleaning and dredging needs to be improved.”

The Country Land and Business Association welcomed the committee’s findings and urged the government to take heed of the recommendations.

“We are pleased the EFRA Committee has taken on board many of our concerns, especially those relating to local determination and Internal Drainage Boards,” Henry Aubrey-Fletcher, CLA president, said.

“The CLA will continue to push for an appeal mechanism so that property owners’ rights are fully protected.”