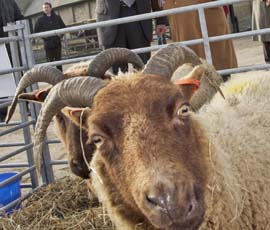 The National Trust is looking for up to 10,000 people to take part in a mass online public farming experiment.

Called “MyFarm”, the experiment will invite the public to make key decisions at one of the Trust’s working farms, Wimpole in Cambridgeshire.

The aim is to connect thousands of people with how food is produced by giving them a greater say in how a real working farm is run.

Wimpole farm manager, Richard Morris, will set monthly options for the 10,000 farmers, who will debate and vote on issues including whether to grow wheat, barley or oats as part of the autumn sowing, through to which animals to buy and rear.

For their £30 subscription fee, the public will get a daily behind-the-scenes insight into how the 485ha (1,200 acre) organic farm operates, the right to make decisions on the farm by voting regularly and a family ticket to visit the farm for a day.

The MyFarm website will include video updates, webcams, live webchats, debates and comment and opinion from both well-known farming experts and National Trust tenant farmers.

A spokesman for the trust said a survey published to mark the MyFarm launch revealed people in Great Britain rated their knowledge of food and farming at an average of only 4.5 out of 10, with 75% of respondents hungry to know more about how food is produced.

Fiona Reynolds, director-general of the National Trust, said: “MyFarm is an exciting new project that will give thousands of families and classrooms across the country the opportunity to experience the highs and lows and often complex decisions farmers face on a daily basis.

“As the country’s biggest farmer – more than 80% of the 250,000ha of land under our care is farmed in some way – it’s our role to re-connect people with farming to promote better understanding and greater protection for the land on which we all depend.”