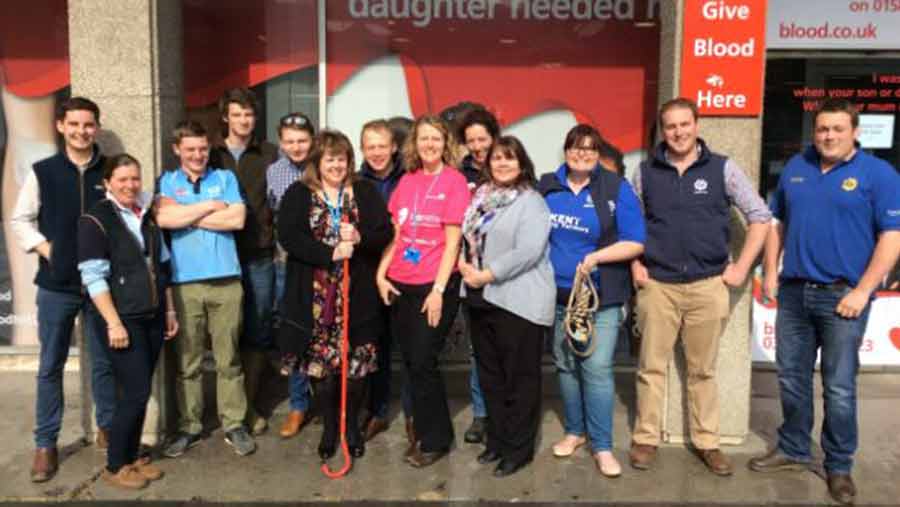 Each year, the chairman of the National Federation of Young Farmers Clubs (NFYFC) designs a campaign for members to get involved in. Chris Manley chose to promote the issue of blood and organ donation when he was elected in February.

Mr Manley thought it would fit well with the organisation and members: “It is very linked to farm safety, and doing good things like this in the local community will help to put Young Farmers on the map,” he said, as he believes Young Farmers’ Clubs are the lifeblood of rural communities.

In partnership with NHS Blood and Transplant, he is challenging members from across England and Wales to register to donate and he aims to recruit 500 new donors. He was inspired by his sister who has donated blood 18 times.

“Blood and organ donation doesn’t cost the individual anything more than their time but it has the potential to make a huge amount of difference to local communities,” Mr Manley said. “It would be great to see all YFC county federations get behind this partnership and compete with each other to register the most donors and help save the most lives.”

Members will have the opportunity to sign up and find out more at the NFYFC’s Annual Convention in Blackpool on 6 May.

Ian Trenholm, chief executive, NHS Blood and Transplant, says: “We are delighted that Chris has chosen to support and promote blood and organ donation during his year as chairman. We rely on the generosity of donors and it is vital that more young people sign up to give blood and join the organ donor register. With blood donation especially, we constantly need to recruit more donors, to replace those who are no longer able to donate.”

The NFYFC is encouraging all Young Farmers over the age of 17 to donate blood. To register as a new donor, visit www.blood.co.uk. To sign up to the organ donor register, visit: www.organdonation.nhs.uk

In general, as long as you are fit and healthy, weigh over 7 stone 12 lbs (50kg) and are aged between 17 and 66 (up to 70 if you have given blood before) you should be able to give blood. If you are over 70, you need to have given blood in the last two years to continue donating.