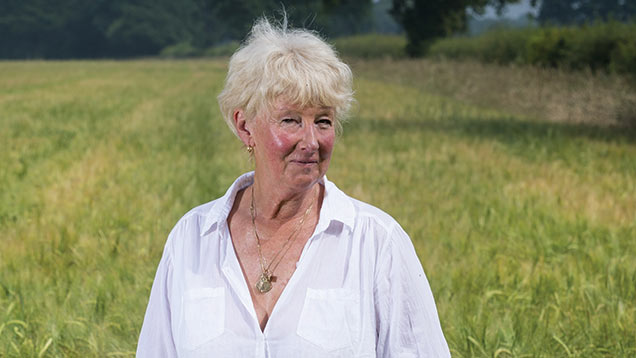 The weather and harvest are taking their toll on John’s normally phlegmatic disposition.

Corn prices dropping and the weather alternating between tropical downpours and tropical sunshine are also contributing to the gloom, as harvest looks like it is going to be later than usual for us.

What is also throwing our calendar out of kilter and adding to the frustration is that hedges cannot now be cut until September.

Usually John can get on with that job if harvest is not quite ready, but now hedge cutting will be pushed back even further into the autumn.

It may even not be possible to cut all of them as, with our strong land, getting drilled up before the weather breaks is the main priority.

But at least the second crop of hay is eventually home. We left it out overnight on trailers well away from the buildings in case any residual damp in the bales caused self-combustion.

One year, we rushed to stack the bales under a Dutch barn, only to wake up the next morning to see the crop twisted and tossed off onto the ground by the energy produced from the warmed-up hay.

The only way to store those bales and prevent them from punching a serious hole in the ozone layer and melt down a large section of the polar ice cap was to spread it out to cool down.

The hens loved it and immediately made several nests. The blissful source of heat was just to their liking and their eggs came out already soft boiled.

Our conventional baler has been giving a few problems. Trouble occurs when the crop is not quite fit to bale, but John is keen to get it home.

A real sunny day sees the whole operation running like clockwork. But not this year.

After the first row of bales, tightly knotted and showering out of the end of the machine in a satisfying shunt accompanied by the rhythmic click-clack of the knife blade cutting the band, things started falling apart. Literally.

Halfway down the next row, the bales progressively broke up as they fell into the bale sledge, either totally unknotted, partially knotted or very loosely knotted.

John worked out that the main problem was that the knotter was failing to get knotted. He changed the baling twine. No joy.

As these bales are for our stock’s consumption and not being sold, he decreased the amount of hay in the bales to relieve the pressure on the twine. The bales still broke.

John invoked every curse imaginable on the baler and called in an engineer. He changed most mechanisms on the machine apart from the outer casing and wheels.

The baler could now do a fair impersonation of French knitting, but would still not knot.

So a contractor has finished the job. Big new machine. Big new tractor. He went twice round the field and then broke down, so John ended up finishing the job.

Realising that the next step was the breaker’s yard, the baler had a sudden change of heart – and has knotted everything perfectly.

The well-being of machinery takes priority at harvest time. John has been washing down and prepping our combine ready for its star turn – which usually involves it grinding to a standstill at the precise moment you need it most.

He frequently notes that machinery only breaks down when you are using it and that it gives you no hassle at all when it is stood doing nothing.

In pursuit of this agricultural beauty treatment, my cherished honeycomb natural sea sponge had disappeared from the bathroom. It ended up trashed while being used to wash the combine windows.

To complete the combine’s make-over, I was dispatched to a dealer to pick up a hub and bearing. Generally, as nobody seems to carry a large range of spares nowadays, everything has to be ordered. This is not entirely foolproof.

I remember parts being ordered for the combine and rushing off to collect them and bring them back to the farm in their branded box – only to find the box empty. I thought they didn’t weigh a lot was my excuse.

On this most recent occasion, the option rested with a combine in the dealer’s yard that was being stripped down, with every possibility of a compatible hub and bearing on that machine.

But when I arrived, the dealer was most surprised that I was not in overalls ready to strip the part off the combine myself.

Luckily, a couple of helpful mechanics sorted the job out and now we are all systems go for harvest. When the weather picks up.

Mind you, the job of spares manager at any local agricultural dealer is not one to be envied at this time of year. Queues of oil-streaked, bad-tempered farmers, clutching obscure parts from the bowels of their machines, will be lining up in front of his desk.

Anxious eyes will scan the computer printouts or microfiches for availability of the part needed to get them going again.