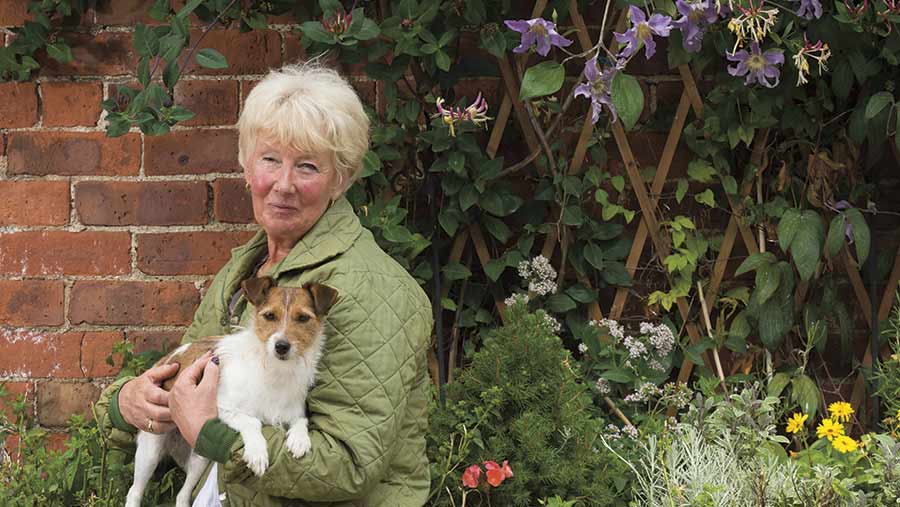 Hidden in our garden, almost totally camouflaged by rampant ivy leaves, is a dilapidated shed. Inside this hovel, a jenny wren’s nest.

This is the third year the shed has been her preferred nesting place and we are hopeful that once more she will bring off her chicks successfully – unlike a robin’s nest, which John found a few weeks ago under the barn in one of the haystacks.

I fear that there was too much tractor/sheep/Land Rover traffic in the nest’s proximity for that little bird. The eggs were laid, but never sat.

Jenny wren’s nest, however, is safely lodged above a garden hoe. Very safely, as there’s not much danger of me using anything so strenuous in the garden as a hoe. So Mrs Wren is providing me with a wonderful, environmentally friendly excuse not to do a lot of gardening.

If by chance the door is opened, although being an old shed with other gaps for her to use as exit and entrances, Jenny Wren leaves her nest at speed through that opening.

It can’t be good for the eggs/nestlings to be deprived of their Mum at regular intervals, so I’ve decided I have no choice but to leave the garden shed, garden tools and gardening well alone.

At the front of our house, meanwhile, a flycatcher has made her nest in the branches of a rambling rose. Many years ago another flycatcher constructed her nest entirely with the fluffy waste material that was used for my youngest daughter pet hamster’s bed.

Each week I nagged Jo to clean out the hamster cage, and we discovered after a time that she was disposing of the bedding by the simple resort of throwing the cage contents out of her bedroom window.

Who needs a waste bin? Waiting for the fluffy bits were a a pair of enterprising flycatchers.

Not only did they have a pink and blue flossy nest, but they had also salvaged the remains of some old Christmas decorations I had put out for the bin men, and their nest was entwined with tinsel. Camouflage is apparently not a flycatcher’s chief concern.

Happily, our barn owls have returned to their tea chest home that is wedged high in an tree above a pond in one of our fields.

Once again they have hatched three owlets and now both parents spend all the daylight hours hunting for food for them. They have remained oblivious to John in his tractor bringing muck from cleaning out the fold yards to be piled up ready for spreading at a later date.

Bobbi Mothersdale and husband John own the 81ha Lowther Farm near York. They have a suckler herd, a flock of sheep and arable crops. Two daughters, three grandchildren, three dogs, assorted poultry, an overgrown garden and country pursuits also take up their time

Equally unconcerned by the tractor has been a doe with twins.

They have been resting up in a field of barley and appear oblivious to the fact that a tractor is working within a few yards of them.

Curlews, too, sit tight on their nests and John has to pretend he hasn’t seen them either as he passes close by. It’s just a game of mass deception out there.

What we have not seen – or heard – yet is the cuckoo. But that will change.

We are off up on (one) of our fishing holidays to Sutherland this weekend. Behind the fishing lodge where we stay, and just outside our window, a cuckoo has trilled its song, goo-koo, seemingly all through the night. It doesn’t get very dark that far up in Scotland.

Apparently over half the number of cuckoo’s that used to return to the UK are failing to appear. The time they actually spend in the UK is declining, with much of their year spent actually travelling back and forth to their wintering ground as far as the Congo.

That couldn’t be more different from where we are going to Sutherland. A real culture and climatic change for this bird. No wonder they don’t actually have much time to invest in building a nest for themselves. Much easier to pop one into a “here’s one I made earlier” model.

And at home, with calves, lambs and chicks all doing well as spring morphs into summer, there has been another young family establishing itself on the farm.

A litter of kittens, born to a cat who has dared to squat and make a home in the deepest recesses of a haystack under the barn.

It must be a very brave pussycat as Millie, our Jack Russell, does not take too kindly (putting it mildly) to any feline who dares to venture into her territory.

But this litter has become increasingly bold and now play out on the hay, teasing and driving Millie to distraction as her little legs can’t get her far enough up the stack to catch cat or kittens. And as the cat is probably helping to keep down the rats, we are not helping Millie to make the ascent.

As a result, Millie is spending a lot of time barking, yelping, squealing and trying to persuade me to lift her up on to the haystack so she can have a go at the kittens.

Sublimely indifferent to this demented terrier, Mum cat perches just inches out of her reach, languorously licking and preening herself.

The kittens just ignore all the furore, although I think they may be in some danger when they do start to climb down from their refuge and into Millie’s territory.

But at the moment they are safe and developing their own evasive tactics to outwit her – a fierce hiss, an aggressive stance and a very sharp sets of claws.