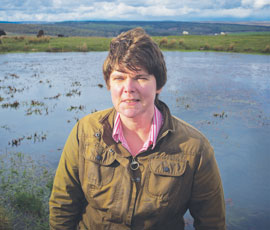 We’ve been rather preoccupied lately. Surviving the winter, lambing, keeping animals alive with expensive feed, that sort of thing. So it came as a bit of a surprise when we turned on the TV to discover there had been a “political earthquake”.

There have been some county council elections and apparently, as a result of these, the whole political landscape has changed. I learnt that UKIP had triumphed and was the “real winner”.

Some of the BBC’s correspondents were particularly frothy. “It is the day that UKIP emerged as a real political force in the land,” declared the political editor. This impression was reinforced by the apparently simultaneous appearance of the UKIP leader, Nigel Farage, on all news and current affairs programmes on every channel for days, which was all rather perplexing to this simple soul on a hill in Northumberland. We didn’t notice any earthquake here and the ground didn’t move, despite a visit by Mr Farage and his campaign coach to our local market town. The UKIP vote in our area (where it stood candidates) was 8%. Perhaps too many people confused the coach with the local playbus (also purple).

Still, given all the fuss,I thought I should look into what UKIP has to say on farming. This was easier said than done. When I went to its website, I found that it shook violently every few seconds. This is deeply symbolic – either of a political earthquake or, more likely, of a project that has not been thought through properly. Farming has not been included in UKIP’s section on “Common sense politics”, which seems to comprise its current areas of policy focus (although fishing and same-sex marriage are included).

The party’s most recent position on farming seems to be set out in the 2010 general election manifesto. The main plan is for Britain to leave the EU. However, presumably not wanting to scare anyone, it would not end subsidies immediately. There is no indication of when or how changes would be made. Instead, the manifesto states that “over time, UKIP will use labelling and advertising campaigns to promote British produce and fairer food prices. This will replace the need for many subsidies.” That’s alright then. We would compete against cheap imports from subsidised EU neighbours through an ad campaign and changes to labelling. That’s going to have to be pretty mighty labelling.

I wonder what it has in mind, considering there is probably a legal requirement to keep things truthful and not libellous. Perhaps a stamp of ‘foreign’ covering half the packaging on imports.

Given that leaving the EU has been a longstanding aim, UKIP’s explanation of how this would affect farming is surprisingly thin. The almost throwaway line at the end of the farming policy section about having county-by-county referendums on hunting adds to the impression that it was all jotted down on the back of a beer-mat.

Looking at the manifesto, farming is not the only area where UKIP’s policies are underdeveloped. Those “tax less, spend more” plans might work if we had a big pile of cash to begin with, but with a trillion-pound debt and a large deficit, surely not.

So, whatever Mr Farage says, it is hard to see how, at the moment, the votes for UKIP are anything other than a protest against everyone else. UKIP has a lot of work to do to convince that it should be taken seriously and farmers can be a difficult lot to convince about anything.

What do you think about UKIP’s farming policies? Have your say by emailing fwfarmlife@rbi.co.uk or on our website forums

Read more from all our columnists online