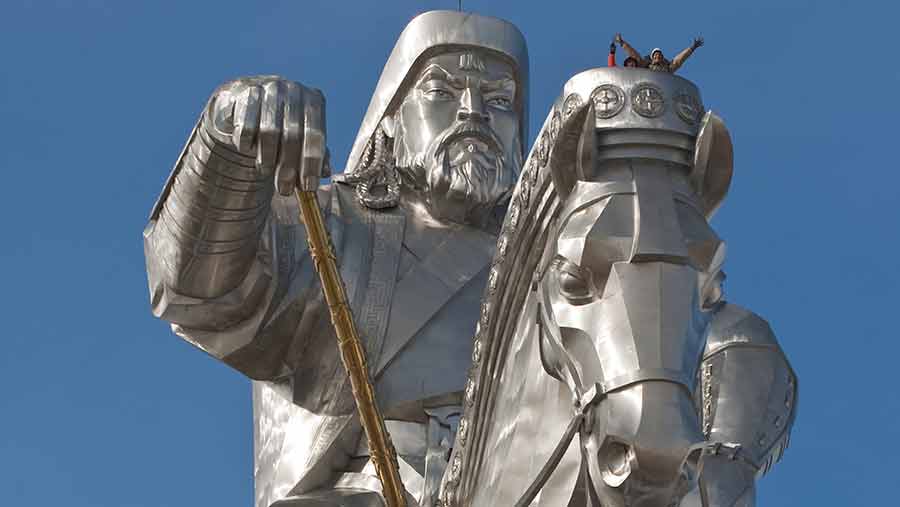 A recent study has shown that millions of men around the world have Genghis Khan’s genes in their genetic makeup.

The famously fertile Mongolian ruler died 800 years ago after conquering much of central Asia and China.

As he went along his pillaging way, he is reputed to have fathered hundreds of children. Having a harem of 100 or more wives must have also contributed towards spreading his genes so far and so wide.

If you’re a man and you occasionally look over the boundary between you and your neighbour and think to yourself “I would quite like to have that land”, it could be Genghis Khan’s genes that are to blame.

Anything else your neighbour has that you might fancy could also be down to Khan’s genetics – although, he would never have clapped eyes on a Range Rover Sport.

For the last 80 years, artificial insemination (AI) of farm livestock has rapidly increased the spread of favoured males’ genetics. This is true across many species of domesticated livestock. There is no doubt that using semen from exceptionally good males to impregnate an inordinate number of females has led to great genetic gains.

The technology to AI livestock at farm level has been available for many years now. While it does rely on being precise with the timing of the AI, it is not beyond the capability of most farmers to successfully AI their own cows, for example.

However, we are in a new and even more exciting era in breeding farm animals. Spreading an exceptional male’s genes far and wide is now old hat. Exceptional female genes have become far more important.

Modern technology has presented ordinary livestock farmers with an amazing opportunity. Having the ability to increase the number of progeny from outstanding females has tipped the odds in favour of improving the characteristics of farm animals.

To use a modern analogy: breeding animals is a bit like playing a lottery. An exceptional ram might get to play the “genetic lottery” with 100 ewes every year. From those hundred ewes he might only produce one big winning ticket (an exceptionally good lamb).

However, things start to get really exciting when you discover a ewe that routinely produces big winning tickets every time she plays the genetic lottery. This is especially true if she’s paired-up with a different sire every time she plays. The ram is no longer the most important part in that equation. He gets 100 chances to come up with winning tickets every year while the ewe only gets one chance.

The people who are leading the way in breeding cattle and sheep at the moment have caught on to the principle very quickly. Brood females are now the main driving force behind genetic gains that are being made.

Once a super female is identified, things can move on very rapidly. The production from that one female can be increased by using modern embryo flushing techniques beyond all expectations. In some cases (with a fair wind), a whole lifetime’s production can be produced from a ewe every year – and for many years.

If you really want to speed things up, you can produce a lifetime’s production from her daughters within the first year of their lives. Flushing embryos from ewe lambs is becoming common practice.

Genomics could play a big part in this process in the near future, but everything at the moment is geared towards finding Superman. We really should be trying to find Wonder Woman.