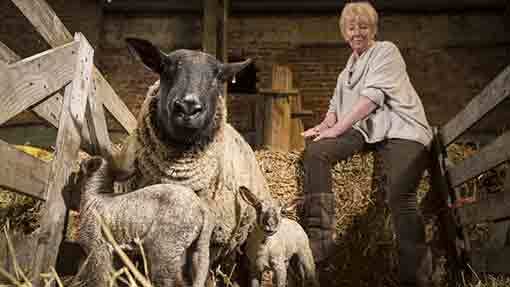 A drop in temperature and more seasonable weather conditions is welcome news in the foldyard.

The combined heat of the herd, bullocks, heifers and calves, has created a tropical sub-climate. “It’s like driving into a sauna,” John said as he walked back into the house dripping perspiration and writhing off his jumper. “All the tractor windows steam up in there and I can’t see where I’m going to drop off a couple of big bales for bedding up. I’ve been lucky not to hit any of the cows.”

Despite this possibility of a tractor incident, the buildings are relatively silent. The cows have settled into an uneventful, ordered life. A stroll round to the silage clamp. A bored glance out at the fields. Occasional draught of water at the drinking trough. A few hours doze to chew the cud. Several of the cows, however, calved in the autumn and some excitement is sparked when they come into season and start bulling.

They are a very forward lot and just as interested in Mr Bull as he is in them, especially as he is back in the foldyard and ready to do his stuff.

Being an experienced stud, he soon gets on with the job, and after several sessions of rocketing around the yard with cows and calves getting nimbly out of the way of this high-speed passion, peace is restored.

To really liven up the atmosphere in the yard, however, what you need is a calving. Then each member of the entire herd decides that they alone have produced the new calf. Boxing Day last year found one newborn calf bawling his head off inside the ring feeder in the foldyard. He must have staggered off after his mum when she went for a mouthful of silage and somehow pushed his way between the bars of the feeder. No idea why. Or how. A crowd of anxious cows surrounding the ring gave him no chance to rejoin his mum until John rescued him.

Out in the fields, memories of the ewe’s November fling have fast faded. The tups are morose. Redundant for another year. Ewes just concentrating on producing a decent set of twin lambs each. We bring the flock home regularly to check their feet and worm them. The sheep, that is, not their feet. If possible we try not to keep the flock for too long on the same pasture as then the bacteria that causes the footrot cannot spread through the flock. But nothing is fail-safe and prevention and vigilance is better than cure with livestock.

It has been a mild autumn so far. Bulbs coming up in the garden and lush growth on the arable crops. But with the advent of colder weather, I have started filling a peanut bag for the blue tits as they signal their hunger in a very determined manner by violent tapping on the kitchen window.

Today a great tit clung to the side of the window frame hammering away on the glass, then flew to the empty peanut bag and back to the window. “Good job it’s not a woodpecker,” John muttered. Closely followed by “Bet it’s a female. Listen to the noise she’s making.” Chauvinist.

Inland, a number of bull finches are feeding in the hedgerows. We rarely see them at this time of year and John is taking delight in their darting flight ahead of the tractor as he drives down the fields to feed the game birds which he put down in the summer.

At home, he is using any moulted pheasant and partridge feathers to pursue one of his latest hobbies to fill in a winter’s evening. Fly tying.

Try telling your friends that you intend to spend an intimate evening fly-tying with your husband. You get some funny looks. “Can’t you sew a zip in his trousers?” they tend to ask. Not that sort of fly, you patiently explain. The sort attached to a hook, or two or even three hooks. The sort with fur, feathers and any amount of glitter, spangles and floss. The sort that will hopefully catch a fish one day.

Last Christmas John’s presents featured new bits of tackle,equipment and materials that he needed to use to tie different flies. Tasteful gifts of dyed squirrel tails, deer skin and capes of feathers. More like “tasty” gifts, the dogs though, presents that were actually gourmet delights for them to nibble on.

Tonight saw John with all his fly-tying tackle out on the kitchen table. A diagram of a Black Pennel and step-by-step instructions of how to complete this killer fly spread out in front of him.

But checking through all his boxes and packets of taxidermy rejects it dawned on him he lacked a vital ingredient: black feathers. Out into the night he strode. Ladder out. Up into the top of the Dutch barn. The stillness of which was shattered by an agonised series of squawks. Flapping and fluttering echoed across the yard. Violations of the most degrading nature were taking place among hens roosting in the barn.

Triumphant, John strode back into the kitchen clutching a fistful of black feathers. Outside, the vehement protestations and accusations of molestation could still be heard emanating from the barn. Fizz, our black-and-white Border Collie, stretched out luxuriously in front of the warm cooker. Pip, the black Labrador, grunted and whistled in her sleep as she chased yet another rabbit.

I dread to think what will happen to them if black feathers don’t suit.