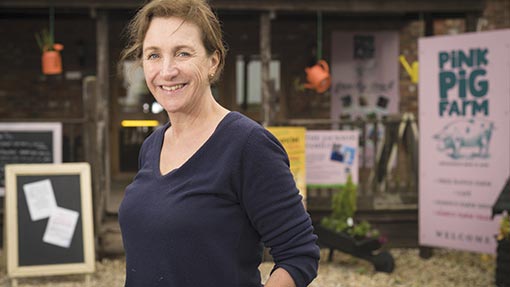 Technology is both the bane and saviour of my life.

My horrible children laugh like drains at my inability to grasp the difference between Snapchat and Instagram – one apparently can be used to send ridiculous photos of yourself misbehaving terribly. It appears on the other person’s phone for seconds then disappears. However, the other doesn’t disappear. Do not take embarrassing photos and then forget which is which, nor load it on to Facebook for everyone to see. Believe me, you just don’t want to.

In line with many other companies, we now check job applicants’ Facebook pages before they join us. We offered one young girl a job, but the night before she was due to start, she posted what we considered an unsuitable picture of her wearing her new uniform, saying how much she was looking forward to working for The Pink Pig Farm. Most of the boys on site thought she’d be ideal for the waitressing job, but I begged to differ. She was dismayed when I told her that she would not be required and why. She suggested that I had invaded her privacy. But Facebook is not private, it is your very public face. Now, if you check our farming apprentice’s page, you will find Josh in a tractor, Josh in a digger, Josh in a combine. As he says: “living the dream”.

Another expert in IT, the son (after all, he has a degree now), is my source of all knowledge when sorting out my computer. However, he is now so fed up with me ringing him (usually at 8am – not a good time for troglodyte coders) that last time I called, he just mumbled “GFGI Mum”. When I questioned the meaning I was slightly disgruntled to find out it meant “Go google it”. With another word in there that I won’t repeat here. Well.

New technology has also infiltrated the playbarn. Parents apparently want wifi to work and play while their children have a good time. We have set up the wifi with a password and one day when it was very busy, one of my girls came running over and asked for the password for a customer. We told her and she trotted back to the customer. Ten seconds later she returned looking a little flustered. “Are you sure the code is Playboy?” she inquired. We all couldn’t answer her while choking with laughter, until another girl managed to squeeze out: “It’s playbarn, not playboy”. She had wondered why we had chosen such an inappropriate code.

As far from IT as you could possibly get was my night at the skittles. I had been invited down by Andy and Tish Jeffries, who run a fabulous farm shop, restaurant and new playbarn called Farringtons between Bath and Bristol, to look at their new playbarn and quiz Paul, their manager, in detail about the hazards of running a child-friendly establishment. I drove down one evening and Andy announced that, as Tish was going bell ringing, I would have to accompany him to his local skittle tournament.

Having a Dorset-born brother-in-law, I knew that such leagues existed, but not to this extent. The skittles are set up to one side of a venue – be it a pub, or in this case, cricket club. It’s a little like a primitive, non-mechanised version of a bowling alley, but far more “earthy” and just as fun. The skittles were picked up manually by a young lad and the ball was sent back to the player via a high-tech piece of drain pipe. Many people seem to belong to more than one league and many (mostly men, it appears) play several times a week.

I got to thinking… our local pubs, especially in Lincolnshire, are failing at such a rapid rate (more than 30 a week at the last count). Why not revive our dying pub trade by installing skittle runs? Not that I’m suggesting everyone takes to drink, but why not save a local institution by installing a skittle alley, setting up a league and challenging local people to play? It would be a low-cost venture and would ensure your local was full Monday to Thursday. I loved my evening (and the cider that Andy made me drink). So simple.

If I hadn’t gone down to Somerset to pick their brains about my new play area, I would have made some very costly mistakes. The entrance would have been configured wrongly, the pricing (which did cause much discussion on the dreaded Facebook) would have been overcomplicated, as would the food, and I would never have found a cheap sock supplier! This is the joy of belonging to an organisation such as the National Farmers’ Retail and Markets Association (Farma). No-one is afraid to share their triumphs or disasters, nor to help others.

At the Farma conference, the speakers always give us food for thought. James Averdieck, co-founder of the GU dessert range, told us the best words of wisdom he had ever been given was by his father, who informed him that the sign of a true entrepreneur was someone who could lurch from disaster to disaster without losing enthusiasm. Brilliant. I think most farmers are fantastic entrepreneurs, don’t you?

Sally and husband Andrew farm 364ha just outside Scunthorpe in north Lincolnshire. They have a farm shop, The Pink Pig Farm (a former winner in the Diversification category of the Farmers Weekly Awards), with a 90-seater café and farm trail. Sally is chairman of the Farmers’ Retail and Markets Association (Farma).