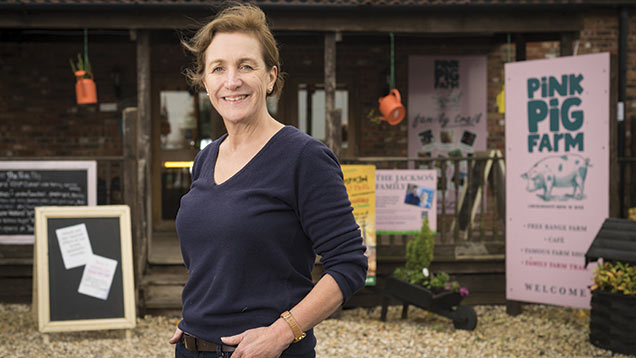 Our reliance on technology is both scary and amazing.

I’m not sure that children can actually walk without a mobile strapped to their heads and it becomes a national emergency if one gets lost or damaged.

Satnav is wearing away our ability to go anywhere without some inane voice telling us where to go – I refuse to have a voice at all on my satnav. I don’t want anyone telling me what to do (especially a man) although the current husband rather fancies having Joanna Lumley in the car with him.

My chef once started back from a Robbie Williams concert at the NEC with a borrowed satnav and found herself, to her consternation, sitting in her friend’s driveway in the middle of Sheffield at 2am, having pressed “home”.

No business today, it seems, is complete without a Twitter, Instagram or Facebook account. It can be an incredibly effective way of marketing (and cheap, too) and an easy way of getting an image or thought across to the general public.

Farmers will soon forget how to drive tractors and most of us struggle with simple mental maths.

It is strange to think that the first real computer as we know it was only developed in 1936 by Alan Turing. Andrew and I went to the cinema to see the new film about him and his invention. It was epic.

The computer very nearly didn’t get made due to the understandable lack of comprehension from the upper echelons of power and, if it had not, the Second World War would probably have dragged on much, much longer.

The film portrayed an autistic scientist obsessed by his machine that he believed would break the enigma code. His obsession paid off and paved the way for the development of the laptops/tablets/phones that we all seem to find so necessary today.

Sometimes, the lure of a screen or just the bustle of the day makes us forget what is real, or beautiful. I had an example of this when the current husband’s right-hand man, Carl, and our apprentice Josh were emptying out the “best car garage”.

I’m not sure why this shed was ever named thus, as I have never seen a car, let alone the best one, in it. It is filled with old signage, the ice cream freezer for the shop, the lawnmower, assorted crockery, gas tanks and junk.

Anyway, as they were immersed in their work, skeins of geese came across the sky – hundreds of them. It was just turning to dusk with the remains of a lovely sunset. They were honking to one another and moving with perfect symmetry.

I shouted across the yard and told Carl and Josh to look up. We all stood in silence for several minutes in admiration. Moments like this simply aren’t the same on a screen.

No business today, it seems, is complete without a Twitter, Instagram or Facebook account. It can be an incredibly effective way of marketing (and cheap, too), and an easy way of getting an image or thought across to the general public.

My eldest daughter follows both Tesco and Innocent – not because she admires the companies necessarily, but Tesco apparently has really good comebacks to tweets and Innocent sends out funny and often irreverent comments that appeal to young people. Should farmers and farming companies do more of the same?

Farmers and farm retailers carry out their day-to-day work thinking that what we do is rather mundane. It isn’t. At least, not to the person walking down Oxford Street at 7am on the way to work who was delighted to receive our tweet showing our first new-born lamb. He said that it made his day and brought a little bit of the countryside to London.

Should we be flooding social media with stories concerning Open Farm Sunday? Let’s get more of the general public on board.

Comments online are so easy to make. News used to be passed on in local shops or down the pub, now it has become a 10pm pastime with a glass of wine in front of the laptop. Electronic gossip.

The constructive comments help a business get better and should be looked on as a gift. The lovely ones can make your day, even though TripAdvisor can be a scourge or a blessing, often with views posted several months after a visit.

I used to get quite upset by the occasional negative review, but then I came across a saying: “When the world gets you down, don’t forget to look up”.

We should tell this to all those who seem umbilically attached to their screens. Maybe they, too, will see flying geese.

Sally Jackson and husband Andrew farm 364ha just outside Scunthorpe in North Lincolnshire. They have a farm shop, The Pink Pig Farm (a former winner in the diversification category of the Farmers Weekly Awards), with a 90-seater café and farm trail. Sally is chairman of the Farmers’ Retail and Markets Association (Farma).

The National Farmers’ Retail and Markets Association (Farma) is holding its 2015 conference in Bedfordshire from 22-25 February. More details on the Farma website