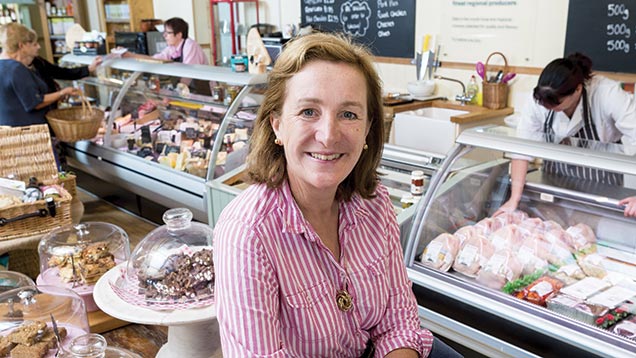 Peace has descended on the farm again.

The hordes of little angels have returned to school, replete with 21kg of mini chocolate eggs between them.

The Easter egg hunt was a great success with the exception of one grandma, obviously sufficiently harried from looking after numerous grandchildren that she decided to remove the wooden eggs from where they were screwed to the posts and bring them into the farm shop to show us.

She managed to demolish two wooden posts completely – the strength of the woman should be admired.

Lambing has coincided (just) with the Easter holidays, as planned – which is a miracle in itself.

One year, the ram, kept separate in late summer, was released by my eldest daughter who was holding a camping party outside and hadn’t realised the consequences of releasing a “ready” ram into the field of maiden sheep.

We started producing lambs at Christmas, up to our hocks in snow and not a visitor to be seen.

Our band of farm park workers have been amazing with the lambing so far, helped by Sophie, a vet student from Nottingham who has been on work experience for two weeks.

“One year, the ram, kept separate in late summer, was released by my eldest daughter who was holding a camping party outside and hadn’t realised the consequences of releasing a “ready” ram into the field of maiden sheep.”
Sally Jackson

Although nowhere near qualified, she exuded a confidence beyond her years and will make a fabulous vet.

I would recommend vet students to anyone lambing; they are a great asset and you form part of their required experience.

Time away from the business is precious and even trips to potential universities count as a day out.

Our youngest daughter Carrie, Andrew and I visited Liverpool University to talk to the professors about her studying geology there.

The university is impressive, the town is beautiful (two cathedrals) and the course sounds great.

The bit that impressed Carrie the most, and made me giggle, was the ladies’ loo.

It is clearly signposted down a short corridor which is lined with drawers full of… rocks.

The challenge is now on to get the grades required – I have every faith.

The current husband has been lately concerned with much more pressing matters – the reincarnation of the Sunday morning football team that disbanded more than 15 years ago.

Out of the blue came an invitation from the arch rivals “The Fillingham Farters” (goodness, the poetry of these farmers) to play at Grimsby Town’s stadium.

The match consists of three teams playing in a round robin tournament. Andrew’s team, Cleatham City (this comprises the house of the original team captain, Edward, his parents’ house and several cottages, these boys always did have high aspirations) are a little younger than the instigators.

The team came into being in 1982 in order to justify an afternoon in the pub and ensure a good turnout every week.

The third team, The Kirmond Killers, are from Grimsby way, so obviously think that they have the home advantage.

We first had to assess who was still around, secondly consider if any of the would-be players might be heart attack material and thirdly, how many working joints the team still had.

All-in-all, with an average age of 53, the team, mostly comprising farmers and farmers’ sons, is not looking too bad.

The main saving grace is that the teams are allowed to substitute all the time, including some young family members.

All the team have bribed, cajoled and bullied their offspring into making an appearance on the pitch.

Most have never played football and it will be interesting to see how these keen rugby and hockey players perform.

Only three young ones are allowed on the pitch at any one time so the oldies won’t get much of a reprieve.

Who’d be a farmer?

The selection of the youth element made us realise how few farmers’ sons and daughters have, or are planning to, return to farming.

In the 1990s, we all discouraged our children from farming on the basis that farming had just been through a period of good times and that we must prepare ourselves for troubled times ahead.

Andrew was told this in no uncertain terms by the professor on a Worshipful Company of Farmers course he attended.

We were told to get bigger, get different or get out, and most farmers have done just that.

Subsequently, we are in a much better place than in 1999 and some of us are now wishing that we weren’t quite so insistent that our children dismissed farming as a career.

At the recent National Farm Attractions conference, farmer and fellow Farmers Weekly columnist Ian Pigott spoke about rebranding the image of farmers away from the yokel with the straw in his mouth towards the tech savvy, business-minded individuals of today, so encouraging the next generation to think of farming as the great career it can be.

Sweatshirts have been ordered, tactics decided on (except we haven’t told Roger who, although being an essential team member, is notorious for complicating matters), first aid kit readied. All is set for the big game. Wish them luck.

Sally and husband Andrew farm 364ha just outside Scunthorpe in north Lincolnshire. They have a farm shop, The Pink Pig Farm (a former winner in the diversification category of the Farmers Weekly Awards), with a 90-seater café and farm trail. Sally is chairman of the Farmers’ Retail and Markets Association (Farma).