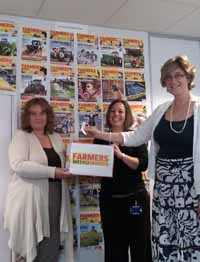 A record number of entries and nominations have come in for the 2011 Farmers Weekly Awards, despite the interruptions of a royal wedding and consecutive bank holidays. More than 500 nominations and entries were received by the 6 May closing date.

The judges in each of the fifteen categories will now tease out three entries to form a shortlist. The judging panel, which includes an independent expert and last year’s winner, will have a difficult task, said awards director, Debbie Beaton. “The quality of the awards entries is incredible and I never cease to be amazed by the truly outstanding achievements and innovation of our entrants. It makes teasing out three finalists very difficult indeed.”

The shortlist for each category will be published by the end of May. Then, the judging panel will be making their way across the country to visit the finalists in their category. The judges will spend three hours with each of their finalists before deciding on a winner. All three finalists and their partners will attend a glittering awards night on 6 October at the London Grosvenor House Hotel, when the name of the winner will be revealed.

Rory Whittaker is the lucky winner of our nominations competition. By nominating someone for the awards Rory has won two free tickets to the awards night. The winning entry was drawn by our events team – Alma Watson, Debbie Beaton and Linda Kimberley (pictured). Congratulations to Rory and thank you to all those who nominated candidates for this year’s awards. If you have not attended the awards before but would like to know what it is all about, take a look at this short video, describing farming’s biggest night out.

Want to attend the best night out in farming? You can book a table online.