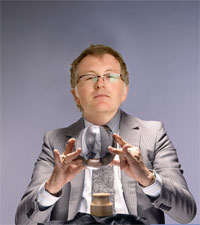 This year was one of wet harvests, rocketing input costs and a collective inability to finish a sentence without using the expression ‘credit crunch’. But what will 2009 bring for country dwellers? Tim Relf – a cross between Russell Grant and Mystic Meg – reads the runes

January
You’ll vow to drink less after the excesses of New Year’s Eve. Then you’ll see your profit forecast for 2009 and pour yourself a large one. You’ll vow to eat less then visit a farmers’ market and gorge yourself senseless on pork pies. There’ll be no be to the lengths you’ll go to to avoid doing your tax return. The Aga will play up. Your back will play up. Your pipes will freeze – which, as a lot of elderly farmers will testify, can be a very painful experience.

March
You’ll turn some stock out then it’ll come wet, so you’ll put them back in for a bit then turn them out again. Then they’ll escape a few times. Then die. With lambing under way, you’ll find yourself watching TV at all hours of day and night. Twenty minutes of Jeremy Kyle’s show and you decide those sheep have got the right idea. Sometimes dying seems the better option. The clocks go forward, but you will forget to change yours. Then you’ll spend at least an hour trying to work out whether you’ve had an hour more – or an hour less – sleep. You will put off the paperwork for SFP.

May
The sap begins to rise and thousands of Young Farmers go on the hunt for partners at the convention in Blackpool. The Aga will start working again, just in time to coincide with the hottest May on record. You’ll start being nice to your silage contactor, ahead of needing him next month.

July
The weathermen will predict a heatwave, so it’ll pour with rain. Merely mentioning the word “combine”, in fact, will spark a downpour. You’ll go to The Game Fair and spend far more than you should on clothes/fishing tackle/gun stuff (or, more likely, a combination of all these items). The Royal Show won’t be as good as it used to be. The Royal Welsh will be better than it used to be. Your collies have puppies. You see the latest bill from your vet. You’ll have puppies.

September
Students across the country will have had a summer of breaking machinery – reversing into fences being the tried-and-tested method, although some will show great imagination coming up with new ways to wreck equipment. You’ll be feeling sleepy. There again, that’s not surprising you have been working 18-hour days for a long period.

November
Fertiliser prices go up more. Manufacturers say the situation in that country you’ve never heard of and have trouble pronouncing has got worse. A strange quango will be set up with the remit of protecting a pointless animal or flower that isn’t really endangered and that no one cares about, but will become protected with the result that a lot of things you now do will become illegal and to carry on doing them will result in a £6m fine or 25 years imprisonment. The budget mean that wherever you live, whatever your circumstances, you’ll be worse off.