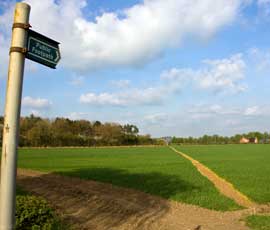 The public rights of way system defies common sense and needs overhauling, according to a new report.

England and Wales has some 137,000 miles of public footpath, bridleway and byway that provides a level of access which is admired around the world, says the Country and Land Association (CLA).

However, the association says it is governed by a “failing bureaucratic and legislative system, which is long-winded, expensive and completely incomprehensible to most people”.

That’s the message contained in a new document published on Thursday (23 February) by the CLA – called The Right Way Forward: The CLA’s common sense approach to access in the countryside – which calls for a shake-up of access and public rights of way.

The CLA report says it is “highly desirable” to improve access in a way that enhances the system, boosts efficiency and gets better value for money.

CLA President Harry Cotterell said: “The public rights of way system in England and Wales is governed by a failing bureaucratic and legislative system which is long-winded, expensive and completely incomprehensible to most people.

“Even to call rights of way a ‘system’ suggests an order and logic not apparent in reality. Many thousands of pounds of public money can be spent pursuing claims for paths which have not been used for centuries while present-day users struggle along overgrown paths because there is not enough money for maintenance. This cannot be right.”

He added: “Public access is a minefield of legal complexity, a tortuous and archaic system beloved only by those who can turn its convoluted procedures and subtleties to their own advantage.

“It is absurd that authorities are required to go through the same drawn-out bureaucratic process to correct small errors on the definitive map as they would have to follow to make significant alterations such as a path closure.”

Mr Cotterell said it could take many years to process a rights of way claim, resulting in enormous cost and ongoing uncertainty for all.

“Even once fought and won, cases can be reopened and examined all over again – hardly a sensible use of resources,” he added.

Although local authorities have seen their budgets cut, the grand plan for an all-England coastal path, complete with ‘spreading room’, remained a key objective of Natural England, he pointed out.