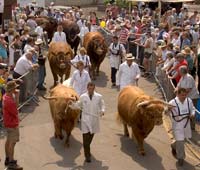 The Royal Agricultural Society of England has admitted that it has been losing in excess of £200,000 each year in order to stage the Royal Show.

Addressing journalists on the opening day of the final ever Royal Show, marketing director Denis Chamberlain said that it was a very sad day for RASE.

“But the RASE is much more than the organiser of the Royal Show and the programme we are putting in place for the future will demonstrate that fact very clearly.”

Mr Chamberlain said that the show should maybe have accepted that changes in the way the show was presented were needed.

One of the errors was to facilitate the development of specialist, technical events without making sure the Royal retained enough content to give farmers a business case to attend, he said.

The RASE has pledged that it will work on behalf of the farming industry and rural environment despite the closure of what was regarded as its flagship event.

Two new events have so far been announced to replace the Royal – AgriLIVE Smithfield which will take place on Dec 11/12 and the RASE Festival of the Horse on July 9-11 July 2010.

“We also expect to announce within the next few days, new events for Champion Livestock and an event aimed specifically at the smallerholder and those keeping rare and minority breeds of livestock,” said Mr Chamberlain.

It had been expected that RASE would be able to confirm details of the new champion livestock show at this year’s Royal.

However, the organisation said that there was “still not concensus” about the way forward.