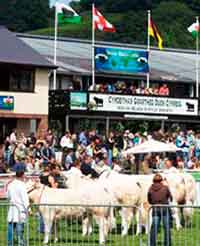 Organisers said visitor numbers at 53,406 had “exceeded expectations” with the figures being 2000 more than in 2008 despite the recession.

The five-year average for attendance on the first day is 49,936.

The Royal Welsh Agricultural Society said that they had parked somewhere between 13 and 14,000 cars and although “it hasn’t gone perfectly, it never does on the first day.”

Some visitors did report a wait of up to two hours in one of the car parks when the shuttle buses failed to turn up.

Organisers said there had been a ‘glitch’ due to the introduction of a new bus company but the problem had been resolved as quickly as possible.

The breakdown of a lorry and a coach on one of the approach roads had caused problems early in the day, he said. “We’ll try harder tomorrow.”

Catch up with the highlights of the opening day: