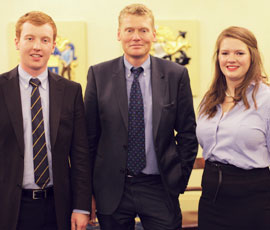 A team of young agriculturalists from the Scottish Agricultural College (SAC) are celebrating after winning a national debating competition in London.

Sarah Allison and Scott Somerville, who both study in Ayr, went head to head with teams from the universities of Newcastle, Royal Agricultural College, Easton College, Bishop Burton College, Aberystwyth and the National Federation of Young Farmers’ Clubs, for the third annual Young Advocates for Agriculture debating competition.

The teams tackled some of the biggest subjects in the industry, from using genetically-modified crop technology in the future of the single farm payment.

But it was SAC who most impressed the judging panel of BBC journalist Tom Heap, Essex farmer Guy Smith, Perthshire Adrian Ivory and 2011 debate winner Charlotte Flint, with their debating skills opposing the motion that large-scale livestock systems lead to poor animal welfare.

Countryfile reporter Tom Heap said Sarah and Scott had shown great presence, delivering their points with little reference to their notes and with strong humour.

Her Royal Highness Princess Anne also awarded the winners their trophy and urged the advocates to continue their efforts to communicate the often contentious subjects in agriculture to the wider public.

“When farmers were left to their own devices to produce food, it was more straightforward, but now they have a complicated relationship with consumers,” she said.

“How the industry’s relationship will stand up with the public and how you explain it is important.

“Contentious arguments are often quite simple and need to be kept that way so people aren’t distracted. That’s why taking advantage of media training [and learning to communicate through sessions like these] are important.”

Princess Anne also took the opportunity to stress the importance of showcasing the industry to other young people so they may consider careers in agriculture.

“The industry has suffered because agriculture is seen is a basic skill. But there’s no such thing as an unskilled job, especially not in agriculture.

“From science and technology and all the skills in between – including the old-fashioned skills like animal husbandry, which take a few years and cannot be learnt online – there are so many opportunities.”

Watch the Young Advocates in Agriculture winners explain why being an advocate for the industry is vital for the future of UK farming.