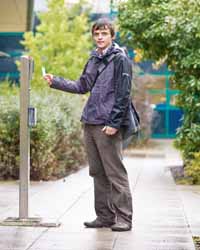 It appears that we have a thief in our midst. Now I wouldn’t like to make unfounded allegations in the national media, but I’m pretty sure that I know who the responsible party is. I only hope that naming and shaming the culprit will somehow give them the push they need to change – although I do fear that my campaign may well fall on deaf ears.

Yes that’s right, the washing machine has once again been pilfering my socks. I’ve lost so many that I’m pretty sure the campus laundrette must now be running some dodgy black-market trade in very smelly cotton.

Despite having chilly feet, the past few weeks seem to have gone incredibly quickly. It must be as a result of being genuinely busy – not only are a large number of deadlines looming, we’ve started researching for our dissertation projects too.

Lectures have been equally varied and interesting, with a number of guest speakers from a range of institutions.

Dr Toby Bruce from Rothamsted Research gave a very informative talk about his work with the “push-pull” method of maize production in Africa, a system that successfully uses trap and deterrent crops to combat pests. In areas of the world where pesticides are hard to come by, finding a cheap and viable solution to pest and disease management is imperative, and we could learn a lot from the principles even here in the UK.

As part of our marketing module the ex-director of the New Covent Garden Soup Company, Geoff Hancock, gave a very frank insight into how the company got where it is today. It was really refreshing to see a businessman being equally honest about the ventures that hadn’t worked as well as those that had, and it was clear that his level of experience was a true asset to any company.

Away from the University classroom, a friend and I decided that it was about time we took our pesticide qualifications so that we can be a lot more useful in the holidays. To those of you who didn’t know, PA1 is the foundation module for pesticide application while PA2 is specific to boom sprayers. The teaching for each one takes place on separate days with a final morning dedicated to the theory and practical tests.

If I’m totally honest, PA1 was largely common sense and not particularly difficult. PA2, however, was much more interesting and I actually learned a fair bit. I did feel sorry for the training centre’s grass field though – after we’d run over it a few times it resembled a rutted battlefield a lot more than it did a paddock.

It seems such a long time since harvest that I’m really looking forward to getting back on a tractor over Easter, though before that it’s a 200 mile drive down to Dorset for the weekend to engage in a sport I know absolutely nothing about: match ploughing. As aficionados of the activity, my flatmate and his family have very kindly offered to put a group of us up for the weekend so that we can enter Puddletown YFC’s annual match.

I have a sneaking suspicion that the skills required are not going to be in anyway similar to the five-furrow Lemken that I’m used to, though I’m very much looking forward to trying my hand at ploughing the “proper” way with the Cox family’s Massey 35.

An endearing image from watching last year’s event was witnessing Peter, my flatmate, trying to push his tractor wheels round from his seat. At the ripe old age of 70 though, I think his John Deere’s slipping clutch was very much excusable.

Back at Nottingham, positions on the main university’s Students’ Union are up for election in the near future, so candidates have been doing their best to get noticed. Though our own mini-SU at Sutton Bonington is elected later in the year, I thought I’d better attend candidate question time to see who is going to get my cross on the ballot sheet. Unfortunately, no one told me just how long question time could last. From bitter experience, I now know that they last four hours.