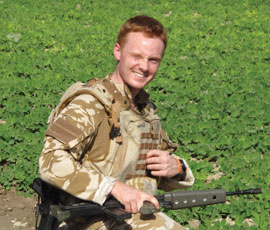 A farmer who is a Territorial Army officer has been honoured for his work towards countering the illegal drugs trade in Afghanistan.

Captain Michael Whitehead from Wiltshire has been awarded the Queen’s Commendation for Valuable Service (QCVS) in recognition of his efforts during a 12-month deployment to Helmand Province.

The 27-year-old, who farms cereals with his parents near Marlborough and is a Royal Agricultural College graduate, was part of the multinational team providing “stabilisation, reconstruction and development”.

Based in Lashkar Gah, Capt Whitehead used his agricultural skills to help strengthen and diversify the licit agricultural economy through the provision of subsidised farming inputs and technical assistance, so helping reduce farmers’ dependency on opium poppy cultivation.

Afghanistan produces over 90% of the world’s opium of which 53%, equivalent to 251sq miles, is grown in Helmand’s fertile river valley.

Operating throughout the whole of Helmand, the multi-million dollar Afghan-led agricultural programme that Capt Whitehead helped develop has benefited more than 65,000 farmers during his tenure, delivering over 22,000t of farming inputs.

“Narco-criminality is certainly not a new phenomenon in Afghanistan,” says Michael Whitehead, “however, it has increased in significance over the last five years or so and is a prime source of funding to the insurgents. Generally speaking in areas where there is greater insecurity, illicit activities flourish. The narcotics trade undermines legitimate governance, creating a culture of fear and ambivalence. It’s a vicious cycle that we need to break.”

Michael Whitehead was commissioned into the Royal Wessex Yeomanry in 2003 and has since completed two operational deployments to Afghanistan.

The citation for his award paid tribute to his “single-minded determination and exceptional dedication” and concludes that his “contribution to the campaign in Helmand was way beyond that normally expected for a junior officer”.

When he heard about his accolade, he admitted to being dumbfounded. “I really was in a state of shock,” he said.