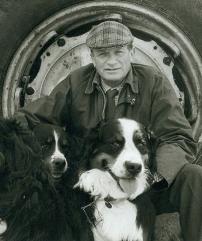 Ted Fellows, former editor of Farmers Weekly, Crops and Power Farmer has died peacefully in his sleep at his home in Painswick [23 February] aged 80 after a long illness.

Ted started writing for the national farming press in 1955 when he was a farmworker and relief milker. He joined Farmer and Stockbreeder in 1957 and quickly made a reputation for being more interested in the practical and technical side of farming, than politics and personalities.

He had no formal journalism training, but a natural writing flair that could entertain, enthral and engage his readers.

In 1973, he was the first writer to receive the now long-standing Perkins Power on the Farm writing award. Ted was instrumental in bringing technical detail to life in Power Farming as Editor and went on to become Farmers Weekly’s deputy editor before launching Crops magazine in 1984.

On Crops, he pioneered the use of colour photography and innovative design as well as focussing on highly technical, detailed and practical content for arable farmers. The magazine was named PPA Magazine of the Year in 1988.

When Ted then became of Editor of Farmers Weekly in the 1990s he pushed its news coverage to analytical and challenging news features, including articles about Chernobyl.

He visited the Falklands after the War, where his son Trevor served, to write a memorable tale of the impact on the farming community there. He will be sadly missed by his wife, Christine and sons Trevor, Simon and Christopher.