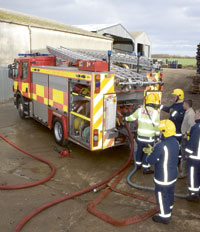 Almost 300 pigs have been killed in a fire on a Suffolk farm.

More than 30 fire-fighters from Norfolk and Suffolk tackled the blaze in a farm building at Poplar Hall Farm in Occold, near Eye.

The fire began just before 1am on Wednesday (16 June) and burned for more than six hours.

Simon Brice, who had been contracted to fatten the pigs on is farm since December, said the size of the fire and the smoke killed most of the 288 animals immediately.

The remaining pigs, which had been ready to go to slaughter, were put down afterwards, he told the East Anglian Daily Times.

Suffolk Fire and Rescue Service said an investigation into the blaze revealed it had been caused by an electrical fault.