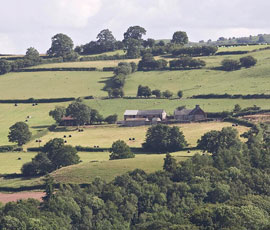 Maintaining the UK’s countryside provides the country with benefits worth more than £30bn a year, a DEFRA report has found.

The UK National Ecosystem Assessment says that rather than incurring costs, measures taken to protect the natural environment bring benefits to Briton’s health and wellbeing.

According to the study, maintaining inland wetlands is worth up to £1.5bn a year to the UK, while pollinators are worth £430m to British agriculture annually.

Living close to rivers and other wetlands was calculated to be worth £1.3bn a year to the population, while health benefits of living with a view of a green space are worth up to £300 each year.

Funded by governments across the UK and carried out by more than 500 experts, the independent assessment found that some ecosystems were getting better at delivering services, such as crop production from farmland.

But almost a third, such as wild species diversity and soil quality, were in decline.

Focussing on the market value of resources which can be used or sold – such as crops and timber – has led to the decline of some ecosystems through pollution, over-exploitation and land conversion, the report warns.

A more collaborative approach to enhancing the environment is needed if population growth and climate change is not going to do irreparable damage to the countryside, it adds.

The report, published on Thursday (2 June), says the results strengthen arguments that the government should focus on policy which enhance and protect the countryside.

DEFRA secretary Caroline Spelman said the report was a vital step in understanding the value of nature and how to sustain the benefits it offered.

“The findings of this assessment have played a big part in shaping our forthcoming Natural Environment White Paper that will help us revitalise our towns and countryside,” she added.

Professor Bob Watson, DEFRA chief scientist and co-chair of the UK NEA, said there was an urgent need to better manage natural resources, but until now the benefits the environment brought had not been properly valued.

“The UK NEA introduces groundbreaking approaches to measure the value of these services and how they will be affected in future if we do not make the right choices now,” he said.

“It shows that we need a more integrated approach to ecosystem management, involving Government, the private sector, voluntary groups and the public working together to protect the services nature provides.”

What do you think of the finding? Is the valuation too much or too little? Have your say on the FWi forums.