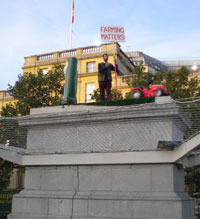 Agriculture and art came together in a unique way for one hour on Tuesday morning (13 October) in London.

Farmer John Charles-Jones took his place on the Fourth Plinth in Trafalgar Square, as part of the groundbreaking One & Other art installation by Antony Gormley, the sculptor behind the Angel of the North.

The project sees members of the public spend an hour on the plinth (a space normally reserved for statues of kings and generals), 24 hours a day, over the course of 100 days.

This “living monument”, which runs until tomorrow (14 October), is intended as “a representation of the whole of humanity”. 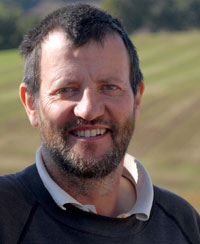 John (left), who was number 2370 to step up, used his one-hour slot between 8am and 9am to convey a “farming matters” message.

With his props – a giant green welly, two model tractors and a simple “Farming Matters” sign – he spent his time on the plinth, in the shadow of the 170ft Nelson’s Column, explaining the vital role farmers play in producing food and managing the countryside.

Backed by an NFU team (he’s an East Midlands council member) spreading the word and handing out leaflets, he fielded questions from passers-by and called out to commuters. 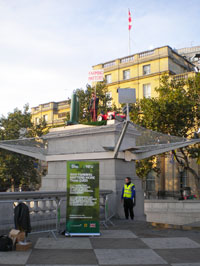 “Do you know how many dairy farms have disappeared in the last decade?” he asked one man, striding past in a pinstripe suit. “What did you have for breakfast this morning?” he called out to another. “Unless farming businesses are viable, they will disappear,” he warned another.

The message obviously struck home with some people. “It’s great – this is an issue that people just don’t grasp,” said David Jaffe, on his way to work in the nearby National Gallery. “It’s important to be self-sufficient in food. Otherwise, we end up relying on having to import it.”

David has seen a few of the precious occupants of the plinth – but reckoned this was one of the more meaningful ones. “There have been all sorts up there – it’s a cross-section of what people feel strongly about. There have even been people naked. There again, it’s art and art can be anything.”

Norfolk farmer David Richardson, in London on business, was also passing. “The man has got enormous courage,” he said. “There is a message to tell and a very important one at that. Yes, it’s a bit of a gimmick – but let’s not be above gimmicks if they help.” 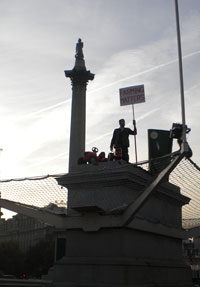 After his 60 minutes in the spotlight, John said: “I’m so passionate about the industry – but all too often farmers are taken for granted. I’ve tried to gear my comments this morning’s towards food – and emphasising our primary role.

“People thought I was a daft beggar – but any sculpture that is any good makes you think. Hopefully I’ve achieved that.

“I’ve never done anything like this before – and probably never will do again! I’ve been called many things, but not a plinther!”