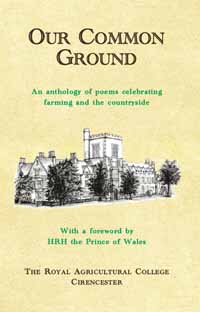 British poets have been inspired by the countryside for generations, so it’s no surprise that there’s enough verse out there to fill a book – and that’s exactly what the Royal Agricultural College (RAC) has done.

In a departure from their usual lectures and seminars, the RAC has published Our Common Ground – a collection of more than 100 poems celebrating farming and the countryside.

The anthology brings together poetry heavyweights like Alfred Tennyson and Oscar Wilde with lesser-known names like Arthur Noble, who writes about the Cotswolds, and Norman Nicholson, whose work is closely tied to the Lake District.

Christopher Gaskell, principal of the RAC, told Farmers Weekly how the collection came about.

“I was at a meeting about land use in London. One of the speakers said they owed their job to Wordsworth, and that we needed another Wordsworth to reignite interest in the countryside. We have a rich heritage of countryside poetry, and it made me wonder if there were any anthologies that collected some of those poems together. The project just grew from there.”

The anthology was originally created for the college’s 350 students, who each received a copy in this year’s welcome pack, but the publication was so well received that a second edition has been produced and launched for sale to the general public.

College librarian Peter Brooks and archivist Lorna Parker had the task of sifting through more than four centuries of verse to find the right material for the book, careful to strike a balance between poems that capture the wonder of nature and the grittier reality of working the land.

Ann Williams gave Farmers Weekly a special reading of her poem The Beekeeper at the official book launch of the RAC’s Our Common Ground.

The earliest verse is an extract from Shakespeare’s A Midsummer Night’s Dream, which describes a wood of wildflowers, probably written in the second half of the 1590s, while other poems in the collection were published as recently as 2009.

The book features original drawings from local A-level student Abigail Portas and a foreword from college president HRH the Prince of Wales, who hopes the anthology “will capture for its readers some of the many facets and delights of nature”.

Ann Williams, a former farmer’s wife whose poem The Beekeeper is included in the anthology, was delighted when she was invited to be part the project. “This is probably the only time I’ll ever be in the index of a poetry book between Oscar Wilde and William Wordsworth!” she said.

WIN a copy of Our Common Ground

Think you could be the next Wordsworth, Wilde or Larkin? Pen an original poem relating to the theme of “celebrating farming and the countryside” and the best 10 (as judged by Farmlife and RAC librarian Peter Brooks) will win their own copy. Email your poem to fwfarmlife@rbi.co.uk along with your name, address and telephone number. Entries must be received by Friday 8 April.