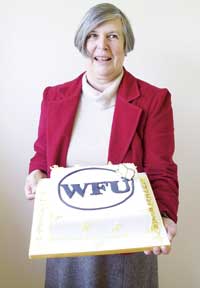 The Women’s Food and Farming Union has pledged to keep working to improve the link between farmers and consumers.

The organisation celebrates its 30 year anniversary with an event in London on Tuesday (20 October).

In a speech to members, acting president Helen Bower will explain the organisation started because the British apple industry was under threat from cheap imports.

“Today the dairy industry like the apple industry 30 years ago is under threat,” she will say.

“It is under serious danger of being so depleted in the UK that the spectre of having to rely on imports for staple food is fast approaching unless rapid action is taken. WFU has long recognised this and has made representations of the benefits, on behalf of the dairy industry, for milk and cheese.”

At the celebration there will be a presentation to former WFU president Ionwen Lewis to thank her for her service to the organisation.

The event is also an opportunity to show that the WFU has put its recent problems behind it.

Farmers Weekly reported in the summer that personality clashes within the organisation had led to difficulties.

The situation culminated in the resignation of its national president, Janet Thorogood, and three long-standing office holders.

But the organisation has stressed that these difficulties are now behind it – and it is focusing on the future.

New branches in Herefordshire and Shropshire are in the pipeline and new members are signing up in Northern Ireland, it said.