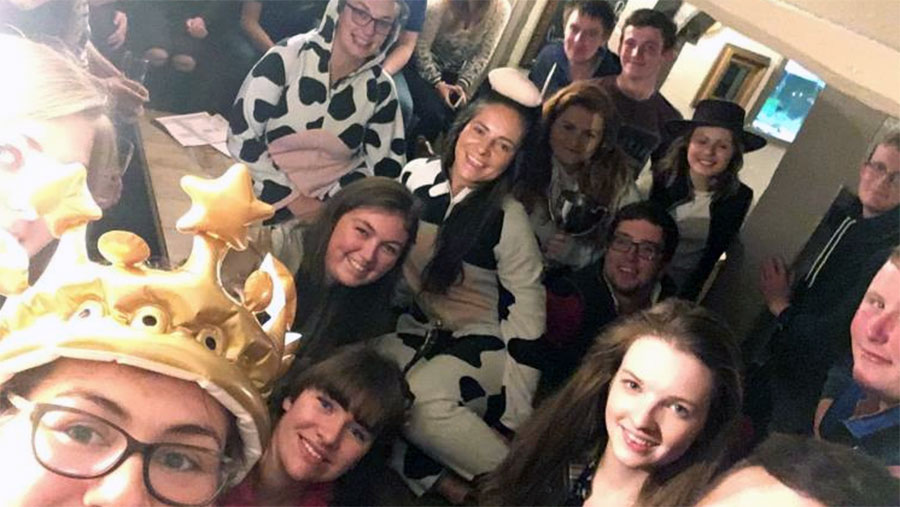 Whitchurch Young Farmers have won a digital camera for their club after taking the best club selfie during National Young Farmers Week.

The Shropshire club selfie entry was one of 54 to be taken and entered into the competition as part of the week (18-24 September 2017) to promote everything that makes YFC such a great movement to be a part of.

“The picture sums up everything about the spirit of Young Farmers,” said Chris. “A group of people who work hard but through NFYFC make great friends, support each other and have a laugh.

“Whatever they are up to when this was taken looks fun, everyone’s smiling and it makes me want to don a cow onesie and get involved.”

If you’re not already a member and would like to join or find out more, head over to the NFYFC website.

If you’re already a YFC member you can get 35% off your Farmers Weekly subscription and if you are a student we will give you 50% off. Just visit our subscriptions page for more details.

Whitchurch YFC was formed in 1961 and today has more than 100 members, who meet at Whitchurch Rugby Club every Wednesday.

See more of the selfie entries in the video below.

Club chair Harry Morgan and club secretary Jayne Bennett were thrilled to hear that Chris and Charlotte wanted to join their club and offered them an open invitation to join as long as they love dressing up and are willing to try their hand at ploughing at their annual match.

“It is such a buzz to win a tough competition and is an awesome job by the Whitchurch YFC team,” said Harry. “Members brought along their achievements from the year and props including the amazing cow onesies. We can’t wait to use our shiny new camera to capture all of the fun moments of our YFC calendar