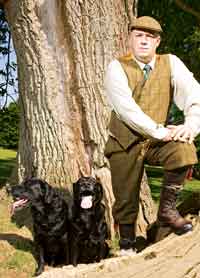 Competition winner Michael Hall (pictured) is a third-generation gamekeeper, steeped in respect for the countryside.

The 40-year-old is single-handed keeper at Brockwood Estate, Brockwood, Hampshire, where he produces great sport on the 1200 acre (485ha) pheasant and partridge shoot owned by the Morton family.

His responsibilities also include woodland management and his conservation work, including coppicing, hedgelaying and planting, provides wonderful habitat for game and wildlife, as demonstrated by an abundance of butterflies and over 45 species of birds.


The judges were certainly impressed. “Michael comes from a family that has provided keepers and foresters for the Hampshire South Downs countryside for several generations,” says the CLA’s Freddie de Lisle. “He brings an accumulated knowledge of game and forestry management which is rooted deep in the local environment.

“It is Michael’s total integration of forestry and game management which marks him out as a winner. The wooded landscape in his part of the South Downs requires careful management to deliver the quality of shooting wanted by the shoot’s owners. This focuses on the quality of the birds and the pleasure of the total experience for the guns, beaters and pickers-up.”

For Michael, gamekeeping is a way a life. “It’s in the blood,” he says. “When I get up before it’s light and can hear the birds singing I think, ‘They wouldn’t be here if these woods were not keepered’.”


In his four years in the position he has delivered a traditional shooting experience for the guns, while improving the environmental footprint of the shoot through conservation management, tight vermin control and the restructuring of game strips and woods.

Max rose to the task when responsibility for the shoot was given to him at the age of 24. He has increased the number of shoot days in a responsible manner and improved game and wildlife habitat. “He has great vision for the future of the shoot,” says Geoff Garrod of the National Gamekeepers Organisation. “And we wish him success with all his plans.”

Highly commended, meanwhile, is Reg Hawkins, of Escot Estate, Ottery St Mary, Devon. A tenant farmer at Escot until he was 50, Reg (now 59) became part-time gamekeeper almost by chance at the 600-acre pheasant and duck shoot owned by John-Michael and Lucy Kennaway.

“The old keeper had a bad back and asked me to feed his poults for a few nights and I have been doing it ever since,” says Reg, who impressed the judges with his calm ability to take everything in his stride.

“Reg manages to juggle the running of the shoot with a huge number of other responsibilities on this very diverse and busy estate,” says judge Tom Blades of the BASC.

“The shoot provides a great amount of enjoyment for guns and beaters alike, while contributing to the conservation and creation of important habitats benefiting a range of wildlife. Escot is a good example of a well-run small shoot and is a credit to the gamekeeper’s hard work.”

For Game Fair coverage visit www.fwi.co.uk/game2009 for the news and action as it happens from the three-day event which opens today (24 July). Plus you can find coverage in Farmlife next week.