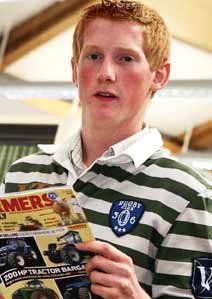 I am now half way through my first term and the time has flown by.

I mentioned in my last article about how hectic and intense the first month or so was, particularly Fresher’s Week. Since then the atmosphere has calmed and reality has returned around campus.

The workload has begun to increase and lectures are more challenging, particularly in subjects that involve mathematics, not a strong point of mine.

That said, I am enjoying my lectures and tutorials, particularly in crop production. We have recently been learning about crop rotations.

Some might say that this is not the most interesting of topics. However, coming from a non-farming background, it’s interesting to understand exactly how the pH of the soil and previous year’s crop type affect the yield of the following crop.

The workload has increased with the setting of three assignments in subjects that include academic personal development, animal production and agricultural marketing.

I have written and submitted the first of these assignments, academic personal development. My topic – baler types available to UK farmers – involved a fair amount of time sourcing information in the Bamford library. As this is the first assignment I’ve submitted, I am a bit dubious as to whether I wrote the piece correctly. Fingers crossed.

There is a emphasis on referencing relevant information sources for assignments at Harper. Correctly noting journal titles, authors and publication dates as well as edition numbers is not the most popular of activities among students. As we are reminded by lecturers, after four years we’ll be experts.

All studying and referencing aside, the Wednesday night fancy dress opportunities remain as amusing as ever. Some of the themes recently have included, Hawaiian, Cavers & Ravers, Bad Taste, and Halloween, to name a few. The latter was very popular – costumes included a ghost, s skeleton, a grim reaper and several vampires.

A recent trip paintballing by the HOPS (Harper Outdoor Pursuits Society) was brilliant fun. Apart from a few dents to pride, injuries on the day appeared to be minimal. However the following day, many of us were suffering from bruised thighs, arms and shoulders, having taken hits from a paintballs.

The Harper Forum, a discussion group run by students featuring outside speakers, has been interesting recently. Some of the speakers this term have included Ruth Badger from The Apprentice, an agricultural specialist from Barclay’s banking, as well as someone from John Bowler Eggs.

I returned home for several weekends at the start November to take part in the Somerset Carnivals. Despite being relatively unknown outside of Somerset, this is a unique event that illuminates towns throughout Somerset with light, colour and music for two weeks in November.

Carnival clubs build “carts” as they are commonly referred to and compete in different classes – feature, tableau, juvenile and comic. I belong to a tableau carnival club. Contestants stand still on a cart as it is pulled around a procession route by a tractor. The cart is judged along its procession route on lighting, music, build-up, make-up and so on. Watching a Somerset carnival is a unique experience and not fully appreciated or understood until seen.

With assignment hand-in deadlines getting closer, as well as the social scene getting busier, the Harper motto “work hard play hard” sums up life here perfectly.